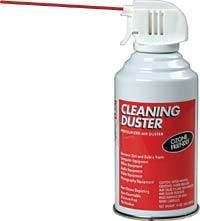 Submitted by a Videomaker reader


Your magazine has helped me out so many times I thought I’d send in a tip of my own. I’ve been using my XL1 for small commercial and wedding shoots over the past year and I’ve always had a problem keeping the lens clean. While filming an active scene with lots of objects I don’t usually see any dirt on my final image, but if I shoot a blue sky (or any solid clean image) I always see a bunch of small and medium sized black specs. I’ve used a Canon lens cleaning kit to clean the outside lens, the inside part of the same lens (the side that connects to the camera), and the piece of glass protecting the CCDs, but nothing seems to get rid of the specs. I was tempted to take in my camera for a professional lens cleaning when I had an epiphany. I bought a can of compressed air and shot a quick burst on the outer lens and that did the trick. The Canon lens cleaning kit was getting the lens clean, but it was also leaving dirt of its own on the lens. I carry my air with me whenever I go on a shoot now and I haven’t had a problem since.


Another side note, when I was doing these tests I was aiming my camera at a blue sky with rooftops and trees barely on the edge of the frame. My camera started freaking out in a rapid zoom-in/zoom-out effect. It took me an hour before I realized it was just the auto-focus trying to find something to focus on.


Send your tips in writing, or on video, to Your Tips, c/o Videomaker, PO Box 4591, Chico, CA 95927. You may also email your tips to editor@videomaker.com. If published, Videomaker will award you a free one-year subscription or renewal. We reserve the right to edit letters for clarity and space and use them in all electronic and print editions.


Digital products, according to the CEA, accounted for most of the industry growth. Stand-alone DVD players are now in 35% of US homes, having sold 17.6 million units in 2002. Over two million digital television sets were sold in the US. The report also points to massive growth in flat panel televisions, portable MP3 players, "Home Theater in a Box" units and digital still cameras.