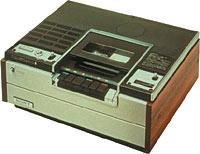 The Legacy of Betamax


Technically, Beta was considered superior to VHS, with a higher head-to-tape writing speed (which results in better quality), simpler tape loading and a more compact tape. However, Beta could only record up to five hours on a tape, compared to the potential eight hour capacity of VHS at the time (although this capacity has recently increased to ten hours with the advent of T-200 VHS videocassettes). At the format’s height, Beta VCRs were manufactured or marketed by Aiwa, Marantz, NEC, Pioneer, Radio Shack, Sanyo, Sears, Sony, Toshiba and Zenith. Today, almost all of these companies manufacture or market only VHS machines (NEC and Pioneer no longer market VCRs, and Sears no longer carries a house brand of VCR). Sony admitted Beta’s defeat in 1988 when they introduced their first VHS VCR.


Hundreds of television stations still use Betacam SP (a version using metal-particle tape) in their day-to-day operations. There is also Digital Betacam, an ITU 601-quality DCT-based version (which is a compressed digital format) and Betacam SX (an MPEG-2-based format).

Frequent submitters to festivals know the tedium and boredom of filling out forms for every contest they enter. Withoutabox makes the process much easier by allowing filmmakers to fill out a generic entry form once that is subsequently submitted to thousands of festivals worldwide.


Withoutabox also offers festival researching tools and can suggest suitable festivals for a particular entry. When it’s finally time to submit your entry, they’ll mail your VHS screener to any festival you wish to enter. Users also get extended deadlines and/or reduced entry fees for select festivals as an added benefit.


The introductory price for the service is $79 per year, which includes one project setup and unlimited submissions to festivals. The second project setup is $69, the third through fifth projects are $64 each and the sixth project (and beyond) are $59 each. Visit www.withoutabox.com for more information.

“Television enables you to be entertained in your home by people you wouldn’t have in your home.”