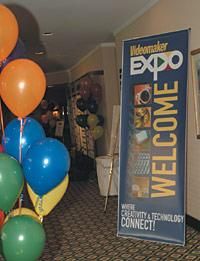 The Expo, held just outside of New York City in late-July, was kicked into high gear with a one-day Pre-Expo DVD Conference. Attendees at the standing-room-only event received knowledge and tips on becoming more proficient at creating their own DVDs and video CDs. The Pre-Expo concluded with a DVD authoring software panel discussion, featuring representatives from Dazzle, MedioStream, Pinnacle, Sonic Solutions and Ulead.

Attendees at the Expo, which drew its highest turnout yet, saw demos of many of the latest video products on the show floor. They also sat in on seminars and special interest group presentations that covered such topics as 3D titling, digital audio mixing, camcorder techniques, lighting techniques, special effects, wedding videos, legal issues and more. MacroSystem US, Ulead and Trilab gave away video gear, each valued at more than $1,000.

Duke Hillinger dazzled attendees with his keynote address at the recent Videomaker Expo East. The president and executive producer of AdrenalineTV is a former nationally ranked water skier and veteran TV producer. The show has found inordinate success combining digital video and extreme sports and bringing them into living rooms in every U.S. television market. Hillinger, who counts on his three Canon XL1 and one XL1S (MSRP $4,699) 3-CCD camcorders for the bulk of his footage, gushes with enthusiasm when he talks about the production possibilities that exist today, as technology becomes more advanced and cheaper at the same time.

"The technology is such that we can all use it," Hillinger said, just as he was about to board a plane to cover the Nation’s Cup International paintball games in Pittsburgh, Pa. "That’s what it comes down to – ample storage space and speed of editing are the two greatest things that we can look for. As technology grows, we can do so much more, so quickly.

While AdrenalineTV does employ two betacams, a Sony BP7 and a BP50, Hillinger is most happy with his DV gear.

"We couldn’t be more pleased. These three-chip cameras are indistinguishable from film," he said. "There are some low-light limits and a little graininess, but we’re so happy to be here now, at the turning point of everybody being able to get broadcast-quality TV with a $5,000 to $7,000 rig.

In Hillinger’s case, he and his crew really appreciate the fact that their DV camcorders are comparatively compact and lightweight. "On skis, going backwards, with the XL1 between my legs, I shot (musician) Coolio coming down the hill on a ski-board," said Hillinger, still a daredevil at 42. Try that with a bulky betacam.

"I encourage everyone to get off their standard A/B systems," Hillinger said. "Nonlinear technology is light-speed. When we cut from five different angles, it makes editing a breeze.

If you think you’ve got a sport or adventure that you think is worthy of AdrenalineTV coverage, write to Mr. Hillinger at duke@adrenalinetv.com.

Video is the key application driving the growth.