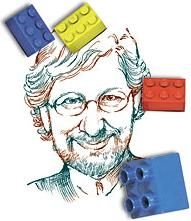 The Steven Spielberg MovieMaker set, designed to work with a computer, has everything a child needs to make a movie. It comes complete with a USB WebCam with a built-in microphone, editing software, sound effects library and a virtual set full of LEGO props with the familiar look and feel of LEGO toys. The kit also includes a tips and tricks booklet full of ideas, a tutorial, example movies and challenges for the young movie maker.

Kids first capture their shots with the included WebCam or the family camcorder and then edit their footage using the kid-friendly software. They can then add transitions, music and sound effects and voila! they’ve made a movie. They can then play their movie on their computer or e-mail it to their friends and family.

This marks only the second time Steven Spielberg has affixed his name to an entertainment product. All Spielberg’s share of profits will go to charities.

"It is a treat to join with LEGO to bring this movie-making capability to kids. LEGO Studios is a great first step for kids who may be interested in movie-making someday. It will let kids show others their inventiveness at playful storytelling," Spielberg said.

In addition to the deluxe Spielberg MovieMaker Set, LEGO plans to market seven additional sets, all of which will include unique LEGO pieces to create various action and back-lot scenes.

In addition to the WebCam, which comes included in the MovieMaker Set, there’s a USB breakout box with composite in and out ports for families that already have a camcorder. This enables easy transfer of video to the computer.

The LEGO Studios Steven Spielberg MovieMaker Set will be available in November 2000, just in time for the Holiday season and will retail for $180. The add-on sets will become available in January 2001.

ClipShow provides a solution to the biggest barriers facing Internet video sharing: Translating video into a digital format, and viewing video on the Web. ClipShow was founded in 1999 by Charles Dauber as a way of sharing videos of his newborn son over the Internet. With ClipShow now you can share all of the precious moments of video that YOU have accumulated to a worldwide audience. There is no software to download or equipment to buy. You can upload or snail-mail your video and ClipShow handles all of the digitizing and streaming to their Web site. The service is free for a limited time only, so get your tape edited and register today at www.clipshow.com and show the world your stuff!

iCanStream.com is a site dedicated to teaching new and experienced videographers the basics of streaming media.

The site showcases the complete process of shooting, editing and streaming videos in four categories: Shoot, Edit, Compress and Publish. You will also find streaming media news and reviews.

The Society of Amateur Videomakers and Cinematographers (SAVAC) is accepting entries through August 15th, 2000 for three video competitions: The Ten Best of the West, SAVAC International Amateur Movie Contest and the SAVAC Magic Moments Contest. Their annual convention will be held in San Jose, CA in October. Download entry forms at savac.tripod.com. or write to Bernard Wood, 439 La Herran Dr., Santa Clara, CA 95051.

The American Motion Picture Society is accepting entries through August 31, 2000 for the 71st American International Film and Video Festival. Video entries must be submitted on one of the consumer video formats: 8mm, Hi8, VHS, S-VHS or Mini DV and run no longer than 30 minutes in length. There is an entry fee of $10. For entry forms or more information contact the American Motion Picture Society, 30 Kanan Rd., Oak Park, CA 91377-1105.