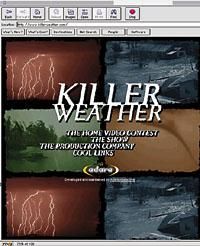 User Groups: let us know you’re out there. For inclusion in our listing,
submit your request to "User Groups," c/o Videomaker, P.O.
Box 4591, Chico, CA 95927. Seeking a User Group? For a list of existing
user groups and/or video enthusiasts seeking or willing to organize a group
in your area, send an SASE to the same address.


The goal of this video/film festival
site is to actively inform and inspire people about how to make films themselves.
It carries out this mission by providing information on upcoming screenings,
venues, info and QuickTime clips from films in the festival. You’ll also
find directions on how to submit your work to D.FILM.

Videonics is now accepting student-produced videos for its fourth annual
"Thoughts & Dreams" competition. Winning schools will receive
awards ranging from a Grand Prize of $2000 and a Videonics Editing Studio
to an MXPro Digital Video Mixer and a TitleMaker 3000 as runner-up prizes.
Productions will be judged on how well they communicate the thoughts and
dreams of the student producers. Short videos (under five minutes) are eligible
and they must be received by March 16. For more information and to request
an entry form, call 800-338-EDIT.

The Environmentally aware Photographic Image Competition (EPIC) is an underwater
photo/video competition dedicated to the preservation of the marine environment.
Before videos are judged on their artistic and technical merits, they must
first pass a panel of conservation judges who will disqualify entries which
exhibit destructive diving practices. Only videographers earning 40% or
less of their income from the sale of their underwater videos are eligible
to enter. The entry deadline is March 15. For more information, call 408-455-2000;
write to EPIC, 17675 Riverbend Road, Salinas, CA 93908; or visit www.epicphotocontest.org.


Dennis Lofgren Productions is looking for videos of extreme weather
disasters for a TBS special that will air this summer. Winners of the nationwide
competition for footage will be flown to Los Angeles to appear on the TV
show. Other winners will be paid $10 per second for footage used in the
program. Send your 30-minutes or less VHS tapes (non-returnable) to Killer
Weather Contest, Dennis Lofgren Productions, 712 N. Seward St., Hollywood
CA 90038. Tapes should be labeled with the videographer’s name, address,
phone number and type of weather situation captured (tornado, flood, etc.).
Call 213-462-5330 or e-mail kweather@pacbell.net for more information.


Move over America’s Funniest Forgettables; make room for the Short Film
Showcase. The developing series is the brainchild of producer Bruce Gillies,
a filmmaker with a mission to "celebrate the medium" of short
film and video. He’s preparing a series of 13 episodes (a complete season)
to pitch to broadcast networks this Spring. The shows will be designed as
hosted one-hour programs, with complimentary Internet content, dedicated
to short films and their makers. Special segments will spotlight Oscar and
festival winners and nominees, documentaries, "Qwik Flix" (one
minute and under), silent shorts, experimental, animations and student shorts.

Gillies’ goal is to establish a vehicle for short films and videos but he’s
quick to point out that he’s not looking for funny scenes from wedding videos.
"I want to bring short dramatic stories to a wider audience through
the ubiquitous medium of television," he explains. "Since 1932,
the Academy of Motion Pictures has been awarding Oscars to short films,
but when was the last time you saw a winning short film in a theater?"

Gillies is seeking all videos–any format, any genre, any production year–35
minutes and under. "I don’t care if it was shot on film or video,"
he says, "as long as it has motion." He will negotiate payment
with producers of any video which he broadcasts. For consideration, send
VHS NTSC tapes, press kit, production notes, stills and contact information
to: The Short Film Showcase, P.O. Box 1148, Hermosa Beach CA 90254-1148.
For more information, visit http://shortfilmchannel.com.