HDTV: Be Informed Before You Buy 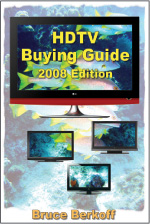 Now that the prices have come down, and the digital conversion is finally happening, many people are thinking about buying a high-definition television. The biggest, baddest analog TVs can be had for a song, but, if you’re looking to take that HD leap, you might want to check out this little book before you buy.

Bruce Berkoff wrote his HDTV Buying Guide in an easy-to-understand style that’s both informative and interesting enough to enlighten even the lowest-level of non-techies in the HDTV market. He opens the preface with a cute letter to his mom and dad, telling them not to be afraid of the technology, but to embrace it. Everything one needs to know to make an intelligent decision is easily laid out in the book.

Berkoff hopes readers of his HDTV Buying Guide will gain important knowledge and understanding about the various TV technologies, so they can make smart choices with good comprehension when they go shopping. Covering topics as the various types and differences of HDTVs, and what features to look at in LCD, Plasma and Rear Projection TVs, the book also touches on HTDV’s capabilities and explains what the digital TV and new FCC guidelines are all about.

Consumers can purchase both electronic and hard copies of the book at amazon.com.

Video producers have had to deal with sharing videos with associates or clients when there is a need to discuss changes and where to go next. You’ve mailed VHS tapes and DVDs and waited for the response. You’ve made low-rez e-mail and FTP links… and waited for the comments.

Several companies have felt your pain and have devised more efficient sharing systems. One such company we recently discovered is Market7, a company that helps producers save time, money and energy as they collaborate on video productions with each other and their clients. There are many programs that allow video file-sharing, like FTP (File Transfer Protocol) sites, but Market7 claims to have a complete, end-to-end solution that takes a video producer and client from the concept and planning stages all the way through to post production. This online environment can make it easy for video producers and clients to collaborate on scripts, share and view current versions of a project, provide feedback directly and more, by streamlining the work involved in getting projects finished and out the door.

You pay according to the amount of storage space you use. Find out more about Market7 and view the key product feature demos. 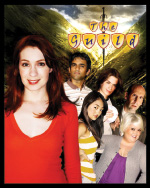 Who says Hollywood execs are the only people who know what the public wants to watch? The Guild, a comedy about a group of online gaming geeks who venture to meet offline, was the creation of Felicia Day, an actress and writer. Felicia pitched the idea to TV execs who said, “No way, too niche,” so she put it online instead. The Guild /s first season had over 9 million hits webwide and support was almost completely from fan donations. The producers were approached by numerous web brands interested in distributing the series, and eventually Felicia settled on Microsoft, who launched Season 2 of The Guild on Xbox LIVE, MSN Video and Zune Marketplace in November, 2008.

Day has appeared in the TV series, Buffy the Vampire Slayer , as well as broadcast and film roles. In between movie and TV appearances, Felicia followed her addiction… er, that is “passion” for the popular online game, World of Warcraft . She decided to use her online gaming experience for something productive and came up with The Guild , a show for gamers, about gamers, by a gamer. She partnered with Kim Evey (creator of web series Gorgeous Tiny Chicken Machine Show ), and the two decided to produce the pilot as a web series. It now has an extremely loyal following, not all of whom are gamers.