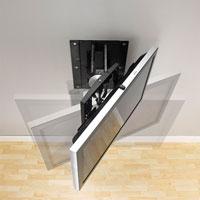 If you’re like many video editors, you have more than your usual computer and accessories on your desk. You might have the printer, a couple extra hard drives, maybe an audio mixer, your camcorder, special editing speakers and… what else…oh, yeah, your computer and monitor. Is the desktop getting a bit crowded? Consider wall-mounting your monitors. Companies like Chief create all sorts of hinged, movable, scalable mounts that might just be the ticket to help clear the clutter.

Recharge with USB and go Green

USBcell by Moxia has the answer to two problems with batteries: eliminating the need to figure out how to dispose of them in an eco-friendly way, and how can you easily recharge the rechargeables? Normal rechargeable batteries do save you the disposal concerns, but you have to have the proper charger for the right battery. But the USBcell battery uses one of the most common outlets out there: your USB port on your computer. When your battery loses its charge, simply plug it into any device that has a USB port, including laptops, hubs, games consoles and even keyboards and monitors, and the battery uses that port as a power source to charge. Released a bit over a year ago, the USBcell is now nationwide and a 2-pack sells for about $20. Don’t want to use your computer? USBcell can also be recharged from approved NiMH chargers.

Dreaming Tree Films/Chicago has begun producing a national filmmaking competition for teens ages 14-19. Called Samsung Fresh Films, it focuses on offering better-quality films via the Internet for teens to watch and allows them to enter film competitions geared exclusively for filmmakers in their age group. Thousands of young producers entered this past summer’s competition in hopes of being selected to work on one of nine city-based all-teen film crews challenged to create a real festival-quality short film within one week’s time. The competition was judged by such Hollywood notables as actor John Lithgow and producers from Napoleon Dynamite, MTV, The American Film Institute and FilmThreat.com.

The teen producers were in charge of every aspect of the film they were making, including production, location scouting and PR for media distribution. The winners of the 2007 competition will be announced in June of this year, and kids can sign up on the Web site to receive an e-newsletter to learn about the next competition. Besides the competition, the Fresh Films Web site also has stories on young directors and screening geared to the younger audience. You can view some of the past films and even use the Fresh Films forums to talk to the producers of those films for assistance on your own upcoming projects. Videomaker applauds Fresh Films for giving youth the chance to learn and participate in this wonderful experience.

Speaking of festivals, did you know you can now view a growing list of video and film festivals at Videomaker’s own Web site? You can even submit information about your upcoming Festival. You can sort by festival date, location or event. Videomaker supports many video and film festivals all over the United States so be sure to get yours on the list! Check it out at: www.videomaker.com/community/festival