Wearing your Camcorder on your Sleeve…

…or anywhere else without cumbersome wires. Twenty20 is unveiling its latest gadget with wearable camcorders. The video camera mounts on any object, and is completely hands-free and cable-free, too. Partnered with Ziba Design, the camera is designed to go where most cameras can,t and to shoot action video as you, the producer, see it shot in your mind. The unit is rugged, small (about the size of a cell phone) and records to an SD memory card. It is expected to run about $350 and, as of press time, it is expected to be released this fall. Pre-orders are available at www.twenty20camera.com, or email support@twenty20corp.com to sign up for updates, pictures, videos and pre-order information.

Here’s your chance to see a movie that has been sweeping the festival circuit and winning awards on every stop it takes. Last Stop for Paul is about two young men on a journey to honor a fallen friend by scattering his ashes all over the planet. The movie itself had its crew globe-trotting all over the world. Most of the scenes were shot on location and the producers kept costs down by using locals as talent. The movie was shot using Panasonic AG-DVX100A camcorders and two Lectrosonic 100 microphones. The producers had the movie edited on an Avid Symphony system.

The film started out as an Internet series of “webisodes” and has been seen by thousands of fans for nearly a year. The feature film version has been collecting awards at film festivals worldwide.

The movie will open in theaters this October and we believe is the first Internet ‘webisode’ series in history to get a theatrical release.

Festivals, Vidcast, and Webisodes to Watch

The Fourth Annual Mobile Media festival, “SXSWclick!” contest is closed, the winners have been picked, but South by Southwest is getting bigger and bigger. It,s not too early to think about entering next year,s festival, so get working on your video now-the competition is getting fierce. 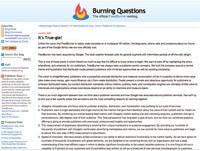 iThentic is a new place for webisodes and mobile content and shares its revenue with content producers. iThentic wants original, high-quality videos, webisodes and video produced precisely for mobile devices. 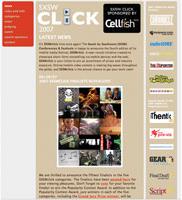 FeedBurner, a company that provides service for blogs and RSS feeds, was recently purchased by Google. Feedburner was designed to help make content management easier and also help the content providers keep track of readers, clicks and other fun stats. FeedBurner-Google is still mum about its long-term plans.