Imagine a world where all of your video content, not to mention still photos, music files, business documents and such, are stored in a virtual vault to be accessed wherever there's Internet access. Well, you're living in that world right now. There are many companies that have this service already in place and one of them, Streamload.com, is offering it free; at least 25GB of it. We gave it a try and were able to set up an account, upload a small 7MB H.264 compressed video and a large 650MB DV compressed video and download these files from a second computer without a problem. We weren't as successful with Streamload's sharing options. We're guessing this is something that will be ironed out, hopefully before you read this.

Compress for Your PMP (Personal Media Player) for Free! 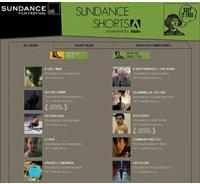 There are many easy ways to get your video into handheld devices these days, and most of these software options cost less than $50, but Videora just came out with one for free. The Videora Converter will let you compress common digital video files (.avi, MPEG, etc.) into formats that portable players like the iPod and Sony's PSP can read. The converters are freeware, though the folks at Videora would love a donation if you are happy with the program.
www.videora.com/en-us/Converter

The democratization of producing and distributing moving image and sound marches – no stampedes – forward, as further demonstrated at this year's Sundance Film Festival. If you were not able to attend this year's week-long event which began January 19 (or more likely, couldn't find a hotel room), you can still partake, electronically. The close to fifty short narrative and documentary films online look and sound great in the embedded Macromedia Flash 8 player.

During the first week of Sundance, an estimated 700,000 viewers watched Festival videos on the Internet. And shorts are not the only content Sundance is sharing for free. Director chats, audience question and answer periods, and daily wraps of happenings in Park City are also posted.

"The fact is, this is more of a democratic technology, and that's great," said Fast Future Generation director Marvin Jarrett. Jarrett, like other filmmakers at Sundance, had versions of their films available for viewing on cell phones as well.
The Sundance Film Festival is the only major film fest to premiere films on the Internet in conjunction with their live premieres, and you don’t have to fill out forms or pay a fee.
http://www.sundance.org/festivals/sundance-film-festival