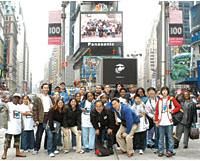 Super Size Me on Video

The recently-released feature Super Size Me chronicles West Virginia filmmaker Morgan Spurlock’s experience eating nothing but McDonald’s food for an entire month. The feature explored the legal, financial and physical effects of fast food on the health of the American public. The filmmaker shot the piece using a Sony DSR-PD150. The feature has won numerous accolades, including a Best Director award at the Sundance Film Festival. The feature has also gained recognition from MTV, SXSW, the US Comedy Arts Festival, the Artivist Film Festival, Hot Docs and film festivals in San Francisco, West Virginia, Philadelphia and Washington, DC. It’s also earned critical acclaim from Ebert & Roeper, The New York Times, Entertainment Weekly and Rolling Stone, among other outlets.

The World Wide Web is home to a staggering array of media. While a number of search engines have refined the art of indexing text, images, newsgroups and product prices, sounds have been largely ignored, until now. FindSounds is a search engine that allows you to specify the types of sounds you’re trying to locate by keyword, format, number of channels, resolution, sample rate and file size or by category.

FindSounds is also offering a standalone program, FindSounds Palette, which allows you to catalog and edit your own sound clips, as well as access the FindSounds index directly from the program. FindSounds Palette is available as shareware, which can be used on a trial basis for 15 days.