If you have a video project that you want to distribute, but don’t want to deal with any of the logistical challenges, such as feeding DVD duplicators, labeling or printing jacket artwork, CustomFlix might have the solution for you. For a one-time $49.95 setup charge, you can have CustomFlix publish your video for a full year (future distribution is $9.95 per year). Each disc sent to a customer is priced between $1.79 to $9.95 per copy, plus 5% for fulfillment and credit card processing costs. All discs ship with color-printed packaging.

More HDV Products On the Horizon

JVC’s innovative HD-on-Mini-DV tape format is beginning to gain acceptance. Now standardized and finalized as HDV, other manufacturers and products are starting to come out. JVC’s GR-HD1US and JY-HD10U were the first HD camcorders to use the format that eventually became HDV. Rumor has it that at least one other camcorder manufacturer will introduce an HDV product shortly, and now, with JVC’s CU-VH1 portable HD player/recorder, you can view your HD footage anywhere.

The CU-VH1 features a 3.5-inch diagonal LCD viewscreen and can play HD video recorded at 720p 30fps, SD video recorded at 480p60 and standard NTSC DV video. The device also has standard external audio/video outputs. The recorder includes a FireWire port and a SD card slot for still shot playback. The recorder can operate on either AC or a battery pack. The CU-VH1 is available now for $1,999.

Xdrive: Storage and Streaming for a Song 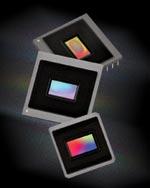 Xdrive’s digital video service is now available for prices starting at $9.95 per month for 500MB of secure online storage. The service supports a number of video formats, including MPEG, Windows Media, Real and QuickTime. The password-protected service lets you to control who has access to your media, but you can share your video with anyone. The secure environment also limits your data’s exposure to viruses: www.xdrive.com.

CMOS Image Sensors: In Your Future?

CCD image sensors dominate the camcorder industry. Before the CCD, there were tube-based image sensors, such as Trinicon and Newvicon, and CMOS image sensors. The CMOS image sensors of the past had a reputation for cutting corners, but CMOS has had a renaissance thanks to companies like Altasens, a new spinoff of Rockwell Scientific, and ITX Corporation of Tokyo, Japan.

Altasens’ ProCamHD is a high-definition, 16:9 CMOS image sensor that features 20% lower power consumption compared to similar CCD sensors. CMOS sensors can pack as many pixels into the same areas as their CCD counterparts as well. Additionally, CMOS sensors also include much of the processing circuitry on the chip itself, as opposed to CCDs, which require external processing chips. CMOS image sensors are approximately half of the cost to manufacture when compared to similar CCD sensors.

And it looks like CMOS isn’t just vaporware: both Ikegami and JVC’s Professional division have already adopted Altasens’ ProCamHD image sensor in some of their new designs.