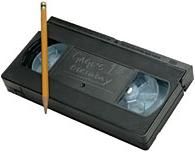 Tired of sticky labels that don’t peel off easily? Try using a pencil to write directly on your VHS tapes instead of using a label. It’s fairly easy to read, doesn’t rub off and can easily be erased if you want to re-use a tape.

I produce videos for the government, and I’ve been in the television production since 1971. I work in a video production facility where we have the luxury of having an Avid and a Casablanca. I prefer the Casablanca, as it does almost everything the big-dollar Avid system can do.


From the start, however, I complained about the Casablanca’s audio. When I edit, I lay down audio effects as I go. But the Casablanca audio would shift when I added transitions. And if I wanted to pluck a scene out of the storyboard and move it somewhere else, I’d have to remember to do the same with the narration or music track.


Then, I had a revelation. Sleepily editing my way through a very long sequence, I added a title. Because I was tired, I absent-mindedly rendered the title as a scene. To my surprise, when I played the scene back, all the audio and music were wedded together. I had just discovered how to make multiple layers of audio, video and transitions combine into a single scene.


To render scenes, I add a title without typing any text. I squeeze the range down to one frame (it saves rendering time) and then render it as a separate scene. Several times I’ve popped on a title at the start of my project, setting the range through the last scene, then let it render for a half-hour or so (depending on how long the whole project is). Voil! I have a single scene of my 20-minute video with all my sound effects, music and narration combined as one.

In the January 2002 issue you published an article named Copy Protection. My tip is if you want the character, just use the keystroke Alt+0169 in many Windows applications. Be sure to use the number pad on the right side of your keyboard.

Here’s a tip that will score big points when you shoot a wedding video. The still photographer usually kidnaps the bridal party for at least a half an hour after the ceremony, leaving a break for the video crew until the bride and groom arrive at the reception. Take advantage of some of this down time to shoot closeups of the food table, including a long hand-held dolly shot of the buffet table. Also, get some really good shots of both cakes, and include extreme close-ups of the detail of the decorative icing and the cake topper.


Every family I’ve worked with has greatly appreciated the inclusion of the food display as part of the wedding video. They usually didn’t get to see it before their guests tore it apart. It also may be the only time the people who pay for the food service actually see, in detail, exactly what they bought. And who knows, the tape may help them settle any disputes they might have with the caterer about what was served.

I recently purchased a small stand-alone labeling device. Mine happened to be made by a company called Brother. Not only did I find it handy for creating labels for my tapes, but also I found that I could use the small-width tape for printing out labels for all my cables. Now all the connections in my editing system are tagged with their functions and it has alleviated a lot of confusion when I go to rewire things. I even did it with my home entertainment system and all of my family members have appreciated it whenever we add or change a device.

I used to shoot horse races. I discovered when making a long pan on a tripod to follow the action, shuffling my feet side to side made the movement slightly jerky. However, if I crossed my legs, one foot behind the other, the movement came out very smooth. Try it out next time you need to shoot a long pan.