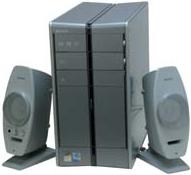 In the weaknesses caption, it says “Can’t edit analog video.” But in the body of the story, it says you can “dance a little two-step to get this footage into your editor by first converting it to DV AVI files using the Giga Explorer application.”

So: Does it edit analog footage? And if so, is the required software packaged with the VAIO?

You guys are a godsend. Throughout my pursuit of a second bachelor’s degree in Film and Video at Columbia College Chicago, I was an avid reader of your magazine, but I was still having a problem bridging the gap between video and film. In my subconscious, I knew the only big difference was format (this was back in the early to mid ’90s), but if approached properly, video can have the same production values that film has. I started out pursing my first B.A. in Mass Communications, with an emphasis in broadcast production. I did documentaries, but I was still allured by film.

Once moving to the Midwest, I became more involved with film, but I was never able or motivated to do my own indie because of money. Now, with the advent of digital video and how it has been incorporated in film, I feel comfortable, after almost four years, to pursue this endeavor again.

So, now I am planning a huge video/film project and I just purchased (through a private buyer) a Canon GL1 to do it. Then, Panasonic puts out this new camera, the AG-DVX100. Their main selling point is that it can shoot 24p.

I was disappointed because I did not wait and put my money toward this camera and just opted for the Canon. However, the article in the August 2003 issue of Videomaker quieted all my doubts with some good old common sense.

I, too, was under the impression that this meant that it would give you footage a “film look.” However, after reading the article Is 24p for Me? it dawned on me that it merely recorded video at 24p (or 24fps like film runs). Although this is great for transferring to film, the quality of the images themselves would still look like video. All in all, it was a very enlightening and informative article, and has given me new inspiration as to how to make my production as close to a feature as possible. And the fact that one of your readers wrote a letter and did the exact same thing was an added bonus. You guys (and gals) are great. I’m a subscriber for life.

In a recent Light Source column, “Lighting for Compositing” (Videomaker, July 2003), you state that the entire chromakey background behind your subject needs to fill the video frame. This suggests that keying out the background is otherwise impossible. In reality, it’s only the area immediately surrounding your subject that needs to have a proper and properly lit chromakey background because the rest of the frame can simply be cut out and discarded with what’s called a garbage matte or cropped from the edges to reveal your composited background.