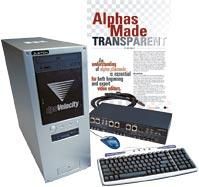 I would like to compliment Pat Bailey on the article "Alphas Made Transparent" in the May 2003 issue of Videomaker. It provides a good introduction to the concept of alpha channels. There is, however, a factual error in the article that concerns me. The article states that "…clips that support alpha information will always have to render when you import them to your editor’s timeline. This means that even systems boasting real-time previewing and playback won’t immediately play without first rendering an alpha clip. A few systems import and render simultaneously, giving the illusion of importing without having to render, but this is a rare feature."

The statement in this article may lead some of your readers to think that the marketing of dpsVelocity and dpsVelocityQ is misleading, which it is not – we really do provide this feature. Furthermore, readers looking for a real-time alpha channel solution may give up their search, without knowing that such a solution exists.

A recent Reader Tip discussed use of compressed air to clean the lens when shooting toward the sky.

The focus problem they were noting was probably a consequence of using a very stopped down lens which leads to imaging little specs of dirt on the front element of the lens (or, hopefully, some protective filter).

With the XL1, however, you can utilize the internal neutral density filter, thereby forcing the system to use a wider lens opening. Setting the system to shoot at higher shutter speeds may serve to complement this workaround.

Users of other camera systems can also place varying density neutral gray filters on their lens or adjust shutter speeds.

Being an independent director, I’ve found your magazine extraordinarily useful in the recent months that I’ve had it. However, I did find your issue on DVD creation and burning software a bit lacking. You touched on most of the generally affordable products, but I personally would have liked to see mention of some of the more professional packages out there. For instance, Sonic Scenarist, one of the premiere DVD programs out there. Mayhap it was just too rich for Videomaker’s blood, but I would have liked to see some discussion on the upper echelon of product out there, the stuff Hollywood uses.

I still remain a loyal reader and fan.

Our buyer’s guides are limited solely by the prices of the equipment they compare, based on what our readers are willing to spend on a product in a given category; in this case, our ceiling was $3,000. Scenarist starts at $4,999. So for the purposes of this particular buyer’s guide, Scenarist was indeed ‘too rich for [our] blood.’