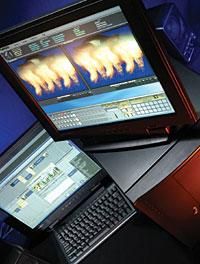 It is hard to fathom the difficulties you must have in pulling together the Turnkey Editing Computers column every year (August 2002). Unfortunately, lumping off-the-shelf ‘stock’ computers that can be used for editing with computers specially modified for editing might give your readers a mistaken idea as to the ability of a given system to fulfill their needs.


For example, I edit on an 800MHz iMac using iMovie 2. It would be useful for your readers to know not only the amount of RAM a stock computer comes with but the maximum it can hold. While it is true that the iMac only comes with one hard disk I currently have two external FireWire drives attached to it and can add more, or I could add a RAID array. Finally, while it is technically correct that you can’t have true multi-monitor on an iMac, there is a work-around. I can at least preview my edits on a TV monitor by running the signal through the FireWire to the video camera and then on to a TV monitor.


Granted, it would be impossible to cover all of this information in your table. Most stock computers need to be upgraded to function well as editing systems.

I must tell you, in desperation, that as good as your mag is, the fact that you rely on Windows and not extend your services to Macs means you are cutting yourself out of a huge market. This defies all logic since much if not most of the desktop and even professional video production is being done on Macs with nothing more than iMovie.


So, my tip (and I cannot believe that you haven’t heard this before) is to step up to the plate and engage all of us in this business by providing the material in compatible and cross-platform formats.

In reality, Nick, "most" video editors are not Mac users. Like the old Amiga users, Mac editors are a loyal and vocal minority (whom we love, BTW). Our fundamental goal is to teach techniques that can be used on any editing system, on any platform. Considering there are so many more products available for the PC for us to review, and relatively few Mac products, some accuse us of being biased against the Macintosh. Nothing could be further from the truth-we are very fond of the Mac platform.

A Friend in Africa

Since joining the University of Natal’s Audio Visual Centre as a production coordinator, I was given a few copies of your magazine by my mentor. I found them educational and rewarding.


We have had an amazing turnout of projects and currently plan to expand our facilities due to the demand of students.


I reference your articles as I create lessons, and pass your magazine on to students – who are now turning out better and more dynamic projects. Thanks to all of you at Videomaker for your magazine.

One correction in Robert Nulph’s excellent article about lighting ("Light Choice," Light Source, Videomaker, July 2002). The pronunciation of "Fresnel" should be fra-NEL rather than FRA-nel. Or better yet, "fre-NEL". The emphasis is on the second, not the first syllable.

The copy of Sonic Desktop Movie Maestro that we reviewed in the December 2002 issue included three additional CDs that do not come with the software. SmartSound offers six add-on Movie Music CDs that can be purchased for use with Movie Maestro. We regret any confusion that this may have caused.