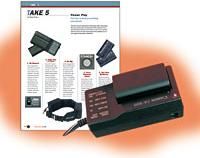 The Take 5 article "Power Play" by Chuck Peters (Videomaker July 2002) is a very helpful checklist. Another helpful procedure I have found to be effective regarding battery-power drainage and life is to store the battery separately, out of my camcorder, until needed. I have learned from my digital photography club that camcorder circuitry on many models causes battery drain, even when all the camcorder’s features are turned off. Many of the club members experienced this unnecessary battery energy drainage in both their video and still cameras.


If I leave the battery in my camcorder when I store it and don’t use it for a couple of weeks, I will have a dead battery when I turn it on, even though it was fully charged before storing. If I remove the battery after using the camcorder, charge it, and not reinstall it until I’m ready to shoot, I will start with a nearly fully charged battery.

Chuck Peters’ excellent Take 5 piece, "Five Video No-no’s," in the May 2002 issue of Videomaker warns against "long, locked-down shots." I would add that video editors need to strike a balance between quick, decisive cuts and abrupt camera switches that destroy continuity.


A prime example is the difference in editing style between two Irish dancing videos featuring Michael Flatley: Riverdance and Lord of the Dance. In Riverdance, director John McColgan captured the spirit and excitement of the show, yet allowed the camera to dwell at one angle on the mesmerizing dance columns.


In Lord of the Dance, the camera angle shifts like a metronome at every four-count. As a result, director David Mallet’s work feels disjointed, and the viewer does not connect with the dancers.


Your magazine gets better each month; keep up the good work.

Freeware in a Blender

In your article, "Fan Films on the Web" (Videomaker August 2002), you reference "…a shareware program called Blender…"


Blender is freeware, entirely free, and is currently in a movement to become open source.

At press time, Blender has (more or less) achieved its financial goals: www.blender3D.com

Casting Some Light on the Subject

I just finished reading, "Shooting an Interview TV-Style" in your July issue. While this is a matter of subjectivity, you recommend shooting at a slightly low angle to make people look more impressive. I prefer to shoot straight on or slightly above so that the subject I’m watching doesn’t come across as more important than my audience and also to hide double chins.

The Need for Speed

I’ve been reading your recent articles about the advantages of different operating systems in regards to file sizes and partition sizes. Although these are very important, I still think you’ve missed the most important operating system choice: speed.


My older editing PC was a Celeron 366 with 128MB RAM, running Adobe Premiere 6.0 on Windows 98. In order to get my capture card to work cleanly, I needed a SCSI adapter and all SCSI drives. Then I partitioned my C-drive and loaded Windows 2000 to make it a dual-boot system. I couldn’t believe the speed difference between 98 and 2000. The Pinnacle DV200 editor I used could easily play any of the files stored on my 7,200 rpm IDE drives. I found I could capture and play clips with no problems on the same drives running Windows 2000.


I have since removed all of my SCSI equipment and I now edit with regular 7,200 rpm IDE drives, and will only run on Windows 2000.