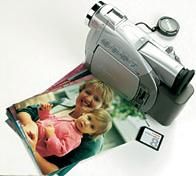 I can’t believe that someone wants to eliminate the snapshot feature on camcorders (June 2002 In Box). I use it often and would hate having to search through footage for every shot I wanted to save. Shots picked this way aren’t as good and the process is much more time-consuming. Also, it’s very handy to be able to show the stills in the Memory Stick with an LCD monitor.


I’d like the still function improved. I wish my Sony DCR-TRV720 gave me the option of 800×600 resolution and that the shots gave clear, true colors when printed, instead of the muddy renditions I get now even after tweaking in Photoshop.


Despite that, the still shots are invaluable and having one camera with both capabilities is a feature I won’t give up. Imagine how many shots you’d miss while changing cameras. Forget it!

In response to Ben Crutchfield, In Box June 2002, the flash card is very handy for recording tabletop animation and for recording time-lapse. Perhaps some manufacturers will incorporate a variable timer as a supplement in the future. Usually, the supplied card doesn’t have sufficient memory, so a bigger card that could hold more than 15 seconds of animation would be preferable.


Also, some camcorders have a synchronized flash, which allows taking a still with greater clarity under difficult lighting than a video frame.


Photographing a postcard or a sign is better captured as a still, rather than chasing through footage to locate it in the editing process.

I am responding to letter-writer Ben Crutchfield, who in the June 2002 issue asked for readers’ comments regarding gadgetry on today’s camcorders. I agree completely with his remarks and see little need for freeze-frame, titling, editing, digital zoom and some of the other features that I am sure most owners do not know how to use and have no interest in.

I wholeheartedly agree with Ben Crutchfield’s letter in In Box, June 2002 regarding the inclusion of still camera features in video cameras. For some time, I have been searching for a Mini DV camcorder without the still capability – without success. I don’t believe there are any. I have a good-quality digital still camera (Nikon 950) which has provided excellent results for several years.


For a camcorder, I have tentatively settled on a Sony TRV900 and am now shopping for price. I suspect the price would be about $300 less if I had the option of leaving out the still features.

We Feel the Love


The only regret I have is that I didn’t know your magazine existed when I started my project, so I purchased a lot of hardware and software that I have had a hard time getting to work together. I would have done it differently from the beginning had I known about Videomaker back then.


Now, before buying a new product, I check out the information in your magazine (a couple of months ago I read an article about DVD authoring and it was a lot of help).

In the May 2002 issue’s Lights & Light Kits Buyer’s Guide, we listed Cool-Lux lights as having fluorescent bulbs. All Cool-Lux lights in our grid come with halogen bulbs. We regret any problems or confusion this may have caused.


The August 2002 review of muvee autoProducer incorrectly stated that the product "discards all natural sound" when, in fact, there is a slider to control the audio mix. The price has been updated since printing: Home Users can get the full version for $50 while commercial users will pay $100 for a Pro User license.