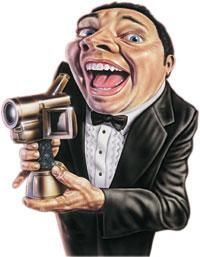 Thanks for the Break

I wanted to thank Videomaker magazine again for the opportunity to enter your video contest and the wonderful award! I hope to use your announcement and this award as an opportunity to really get my video production business off the ground.

Seth won Grand Prize in the 2001 Videomaker/Panasonic Short Video Contest with his compelling documentary, Find My Way Home. Read about it on our April, 2002 issue.

I Beg to Differ

(The Videomaker/Panasonic Short Video Contest) has got to be the lamest attempt at a contest I have ever seen. What is your judging criteria based on? I have plenty of videos that I’ve made at that same caliber as the winners, but I didn’t submit them because I wasn’t very proud of them. Instead, I sent in works that I liked but they did not win. I now know to go to more prestigious film festivals and contests because your judges obviously do not know what is good. Granted, the films I submitted this year were not classics, only because I did them all in about a day or two, but you should have seen the underlying depth and production value associated with them.

Unfortunately, we can only judge based on what we see on the screen. "Underlying" production value can be hard to evaluate. You’ll find details on next year’s contest (including a description of our judging criteria) on page 55 of this issue.

At the end of the article on streaming (Videomaker, January 2002) you asked us to drop a line about our experiences. Your suggested streaming host, Playstream, is excellent and affordable. All the information I needed was there.


I created a 2 1/2-minute video and optimized it for a 28KB modem, at 15fps, letting Real Producer Basic’s wizard (which is free) do all the dirty work of compression. I made two files, one for streaming (386KB) and one for progressive download (833KB). Of course, they look like Internet video but play fine through my 56KB modem on my HP Pavilion 7950. My friends, however, complain of stopped frames in progressive mode and poor audio (especially in streaming). I don’t know why, I really set this stuff for the lowest possible computing power, but you warned about that, didn’t you?


Thanks for the article. I wouldn’t have tried this if you hadn’t written it.

I enjoyed the Test Bench Head-to-Head: HP Pavilion 9995 vs. Compaq Presario 8000T article in the April 2002 issue. I was puzzled by the problems you had getting the DVD+RW discs to play in several DVD video players.


One invaluable resource I’ve used is the DVDplusRW Web site (www.dvdplusrw.org/resources/bitsettings.html). It will help you determine if you need to apply the compatibility bit settings when burning DVDs. Using the info on this site should dramatically improve the compatibility of your DVD+RW discs.

Thank you for the review of the Videonics FireStore (April 2002). Since the review was written some time ago, I wanted to inform your readers that there are some new enhanced features for FireStore and also in particular make note of the battery and field kit that we now offer. This was one of the criticisms in the review that we wanted to make sure you knew that we had addressed.

Thanks for the update, Kelly. Thanks to the folks at Videonics for listening! See page 18 for more on the FireStore upgrade.

In the May 2002 review of the Edirol DV-7, we incorrectly stated that the titler does "…everything but scrolling." We have since learned that it can perform scrolls and crawls. We regret the error and were happy to find this feature is indeed included.