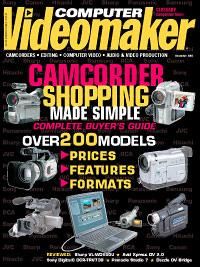 I want to thank you. My name is Luis. My dad is in the business of video production, so I grew up with it. In the late 70s, he got me the first Panasonic camcorder remember the one with the old-school recording deck?

For the last three years I have had my own production company. Two years ago I subscribed to Videomaker and it’s been great. I have learned a lot of great tips from your magazine.

Your new issue was a big help to me. I have a customer who has been asking me about how DV and Mini DV formats compared to film.

I have an XL1 and a GL1, some lights with soft boxes, a dolly, a crane and 20 years of experience. The shoot was going to take 15 days, from eight to 12 hours a day and the film company wanted $150 an hour.

So, he was asking me for some more information to make the decision on whom to hire. Then the mail came with your magazine. On page 15 of the December 2001 issue I saw your profile of the DV Music Video Duo. After he read the Videomaker story, he said, "Let’s shoot on Thursday." I think I’m in.

Thanks again and keep up with all the help for us in this amazing business!

Greg Burke, in your January 2002 issue, wrote in a tip titled The Right Ambience whereby he suggested recording ambient noise at least double the amount of footage you’re shooting. A fine tip, but I really think the quality of your magazine and the education of the readers would improve significantly if you push people towards standard industry practices.

For example, I feel that at the end of his tip, or even in lieu of it, you might have commented that this is referred to as "room tone" and productions generally record 30 seconds of this ambient noise with the video camera focused on the microphone to visually indicate what’s being recorded.

I understand that your target audience is primarily amateur videographers and your magazine has been a great help in my development, but I find that I’m outgrowing it. I would be thrilled with a "Videomaker PRO" magazine or to see the existing magazine broken up into what it is now and a pro section.

There are other "pro" magazines out there, but I really like your format, and the way you break things down in an easy to understand style.

Just a note on the article, Optics 101 in the January 2002 issue, page 63. The typeset of the formula for calculating depth of field was very confusing and the naming of the "far limit" and "near limit" was reversed in the formula. But, very confusing was the typesetter’s trouble expressing F-squared S, when it came out as F2S. Thanks for the formula, which I have not seen before.

We are sure we didn’t catch this error because, although algebra is fun, we don’t actually use pencil and paper for these calculations in real life, but instead use a depth of field calculator on the Web. One example (of many) that we have used can be found at www.shuttercity.com/dof.cfm. We apologize to the author, Bob Stephenson for the error.

In the February issue of Videomaker, the wrong telephone number was inadvertently printed for Pinnacle Systems, whose Studio DV 7 won “Best Capture Bundle” in our Best Products of the Year article. The correct phone number for customer information is (650) 526-1600.

Due to a printing error in the March 2002 issue, some of the column headings on pages 62 and 63 of our Editing Software buyer’s guide were shifted to the left. We regret the error. The buyer’s guide appears correctly on our Web site at www.videomaker.com/scripts/grid_index.cfm.
The Editors