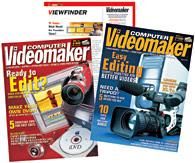 
Mr. York, thank you so much for your recent editorial opinions in Videomaker. I appreciate the fact that you give your opinion as an editor rather than write about all the wonderful things that your magazine happens to be covering in that issue. I receive too many magazines that use this kind of fluff to add an extra page to their periodical.

I gravitated to the idea that (video) cameras would capture "miracles (things that are supposedly not possible)" in the July 2001 issue, as well as the notion that the "divine instrument" has been used for less than divine purposes in the August 2001 issue.

You, as the editor of a national magazine, have a serious responsibility and a very large platform from which to speak. I commend you for your actions in adding real content rather than fluff to a fluff-oriented industry. Please continue to speak out from your heart.


In your August 2001 Videomaker In Box, William A. Anderson wrote, "Why can’t manufacturers produce a simple rugged Mini DV stand-alone VCR that has a jog shuttle capability, reads time code and is controlled through an IEEE 1394 interface for the price of a Mini DV camera?" While such a model may not exist, allow me to propose the next best thing: another Mini DV camcorder.

Buying a second, inexpensive Mini DV cam to use as an editing VCR reduces the wear and tear on your everyday, "good" camera, and opens you up to even more shooting potential, since you would have two cameras to work with. It also makes it much easier to do simple dubs through the FireWire interface from one camera directly to another.

It may not be as professional or as durable as a true Mini DV editing VCR, but with camcorder prices as low as $500, it is certainly a viable alternative.


Referring to your August 2001 Test Bench reviews of UPSs (Universal Power Supplies), it is nice to have a UPS and certainly tempting to "pull the plug" to test it out as you described in your article. You may want to caution your readers however "not to try this at home." The proper way to test the UPS is to turn the outlet off at the circuit breaker. When you pull the plug, you are also separating the UPS and the computer from the Safety Ground provided by the house wiring (the third prong on the AC cord). If there were a power supply fault in the computer, someone might get shocked.

A Word of Warning


The Exploring Dimensions product review in your June 2001 issue assumes you can easily upgrade the editing software on a Dell Dimension 8100. If this PC is anything like the Dell video editing PC I purchased last summer, it will work fine with the included (MGI) VideoWave software. However, if you try upgrading software to something more robust such as (Adobe) Premiere, you’ll need to buy a new capture card. Ours would not capture the audio with the video. Adobe and Dell agreed that I need a new capture card. In your article you say, "especially if you upgrade to more robust editing software." Did you test that? I would not have thought that necessary but I was proven wrong.

We installed Premiere on our test machine and did not have any problems, as mentioned in the article. The Dell Dimension 8100 uses a standard OHCI-compliant IEEE 1394 card. Interaction with this card is accomplished using drivers that are native to the Windows Me operating system. There is nothing inherent about this combination of hardware and software drivers that would prevent it from working with any software that follows this standard. Of course this does not guarantee anything, as you found out. It is impossible to diagnose why you had problems and we didn’t; it could be a variation in hardware, or a difference in installed software or a subtle 0.1 updating of hardware/driver version numbers. We don’t know why Adobe and Dell told you that you needed to upgrade your capture card, to what capture card you should upgrade to or what good they thought this would do (assuming they recommended another OHCI-compliant card).