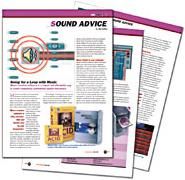 I read with great interest Don Collins’ Sound Advice column on music creation software in the May 2001 issue. While I appreciate the fact that SmartSound was mentioned in the sidebar as one of the many alternatives to the two featured products, Acid and Music Maker, I’m writing this letter because I believe the article lacked some information that would be critical in helping your readers make an effective buying decision in this area.

(Acid and Music Maker) are good products that offer a lot of functionality for music creation. My beef isn’t with them as much as them being portrayed in the role of soundtrack-creation applications. Don fails to point out the fact that they are designed for musicians and for songwriters. When applied to the task of creating soundtracks for visual images, they fall significantly short of products such as SmartSound, that are designed specifically for that task and user. Soundtrack creation is very different from loop-based music creation which requires a completely different skill set from the user, particularly when applied in video situations.

It’s funny, as I was typing this I got a call from a manufacturer of high-end video hardware systems. He bundles Acid with some of his products and recently saw SmartSound. He summed it up like this: "To get anything even average out of Acid you need to spend a lot of time and you must know something about music." This from a person who’s been in the video industry for 30 years.

The dragging and dropping of individual instrument loops is much more time consuming than the article revealed. Additionally, if you don’t know what you’re doing they will not always sound good together without expending a lot more effort.

Finally, Acid (and Music Maker for that matter) assumes you always want beat- and drum-oriented music. These applications are extremely ineffective for orchestral or more dynamic music (such as jazz or music that fits under narration well), which is often what is called for in many video situations. This is an extremely limiting approach to the broad area of soundtrack creation. Not all music is ideal for loop construction, which tends to favor drumbeat oriented music, and the process is still difficult and time consuming for the non-musician.

Including a balanced view of these realities would have helped your readers greatly. It’s widely accepted throughout much of the video industry that for most video users, Acid remains a challenge to use and takes more time than SmartSound. This is what makes SmartSound the No. 1 name in soundtrack creation.

It’s interesting to note that these are two products that I have never seen advertised in your magazine. SmartSound is advertised in every issue. That is because your readers are knowledgeable enough to buy the best product for their unique needs. Your readers already seem to be on board with these realities.

Thanks for your letter, Kevin. The column you mention didn’t pretend to be an exhaustive review of all music creation software products. Rather it was an introduction to the product category as a whole. It used two fairly well-known products only to illustrate some of the features videographers might expect from this type of product. It didn’t extol or decry the performance of either product mentioned, nor did it compare them with others. We’re glad SmartSound has gotten a good response from our readers, and look forward to reviewing the product in an upcoming issue.

In Need of Scripting Software

Our school is interested in purchasing a script-writing computer software program. I remember reading about it in one of your back issues and have not been able to locate the article again. Would your staff be able to recommend a suitable software program for a high school multimedia program? Thank you for your time and effort in this matter.

In the October 2000 issue of Videomaker, we reviewed Parnassus Software’s ScriptWerx. Look for a comparative review of two more script-writing software applications on page 35 of this issue.