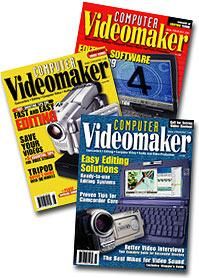 Thanks for the Hand


I am writing to you to give kudos to Stephen Muratore for the Tech Talk column in the June 2000 issue of Videomaker, dealing with streaming media. The article described how to load a streaming video to the Web, step by step, from where to get the software, to what services to use. This type of hand-holding is a godsend to many of us trying to make sense out of all these products, formats and technical hurdles that seem to keep us from accomplishing our goals. I followed the step-by-step instructions and had my own video streaming off the Web within a few hours. Now that’s useful information!

Many thanks to Mr. Muratore and Videomaker for an excellent article. I look forward to many more!

More Video for the Classes

I am a video production teacher at a school in Southern California and I was thrilled to see your article Video Education: Is Your School Tuned in? in the June 2000 issue of Videomaker. We have a young program at my high school, but we have grown quickly. In just two years, we have gone from a small club with six members, a camera and a couple of VCRs, to a fully functioning in-house educational production facility with both beginning and advanced production classes, a broadcast studio and a closed-circuit TV channel. As your article pointed out, we have relied almost solely on donations from private businesses, in our case, the Sony Technology Center in San Diego.

I wanted to let you know that I use your magazine in class as part of an end-of-the-year assignment. Each group in class must pick an article from my archive of Videomaker issues to present to the class. Needless to say, some of the presentations have been very entertaining. Thanks for being such a great classroom resource.

Power to the People

I just finished reading Mr. Daniels’ letter from your September 2000 issue. As a professional writer/producer/director of over twenty years, I want to congratulate you for your magazine.

Mr. Daniels is right, we will be seeing "more horribly written, storyboarded and produced TV commercials", but that’s nothing new. We already do – and many of them are from arrogant, self-important marketing companies.

The most striking potential of the World Wide Web is that it removes many of the gatekeepers that have for so long blocked talented producers with little money and influence from entering our business. On certain occasions I have lost jobs to so-called "professionals" who had the political edge on us. When we watched their productions, it usually became clear that a political edge was all they had. New media opportunities can become a celebration of creative diversity.

Just picked up the July 2000 issue of Videomaker and after reading the editorial on video sharing and then reading your magazine, I instantly became a subscriber. Why? After reading several other video magazines, I have found yours to be a cut above. It seems that you take the video experience far beyond just the magazine. Not only do you have an outstanding Web presence, but you offer workshops too. And now you are feeling the waters for video sharing! I think it’s a great idea. Count me in.

I work in the computer industry and I am a video hobbyist. As a film lover, I have long desired to create my own film, but I also know my limits and I know that there is no way I could get into the 70mm film world. So, I was looking for ways to do something on my own with equipment I can afford.

For a long time I found very little information to help me, until I bumped into your magazine. I read many of your articles about the editing systems and now I have my own Screenplay video editing appliance from Applied Magic. I bought it after a thorough search and analysis, mostly from your magazine. I now produce my own video films.

I just wanted to thank you and wish you the best for your upcoming efforts. Keep up the good work.