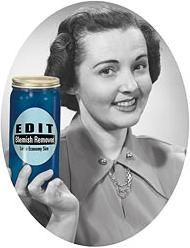 
I applaud your editorial on the origins and uses of the word editing. I’ve never liked the term "nonlinear editing". In your editorial, you explain that the term came about because tape editing has been around for years and some distinction needed to be made. But, when I started out in editing, I worked in 16mm and 35mm film and film editing was always nonlinear. On the Steenbeck or Moviola editors, you always had the choice of an insert, or an overwrite edit though we never called them that. You could always work at the beginning, middle or end of a sequence, without worrying about destroying what came later. You simply cut the film and spliced in your new footage.

When the first computer-based, nonlinear systems came around, we were all thrilled because, unlike videotape-to-videotape editing, nonlinear editing mimics traditional film editing.

It is a great pleasure to find that you have declared the first word of that bulky term superfluous.


I’ve always wondered why, if two actors are having a conversation, directors shoot from one angle and then shoot the same dialogue from another angle and later piece it together. It often results with people in different positions. Why not shoot with multiple cameras so the cuts match? Maybe most actors can’t do more than a few lines at a time.

I do believe these terrible cuts are not the fault of the editors, however. They can only work with the shots they get. Possibly the director of photography the person who is responsible.

Digital is for Sissies

Well, it’s official, according to the May issue of Videomaker, if you don’t use nonlinear editing you’re SCUM. Worse than than scum, DINOSAUR SCUM.


There are still some of us out here who value image quality more than gimmicky nonsense and who will continue to edit in linear fashion until high-capacity, low compression ratio hard drives become available and affordable.

Please don’t forget about us when you select articles to print. We may be dinosaurs, but T-Rex has big teeth.

Don’t get us wrong, Seiurus. Linear editors are very near to our hearts. Be that as it may, computer-based editing is now the norm for many videographers. There are an increasing number of video editors today who have never used an edit controller, stand-alone titler or SEG in post production and never will. But, since you asked so nicely, we’ve included a buyer’s guide and article by Mark Bosko on special effects generators – on page 80 of this issue – check it out.

I read with great interest David Chaveriat’s article, Video Education (Videomaker, June 2000). Last year Mattituck High School, located at the eastern end of Long Island, New York, started a television studio from the ground up. Using one half of the metal shop, students and faculty of the technology department constructed four rooms to house the studio, video generator,and audio equipment and computers.

Tuesday through Friday, 25 students gather to create a live news broadcast over closed circuit TV. Some students search for stories on the Internet while others piece together the script as stories pour in. Students shoot video of local events and school sports using camcorders and edit their footage using adobe premiere. The studio is equipped with 14 computer editing stations, two studio cameras with teleprompters and two main image inputs.

The program here is expanding rapidly. Additional courses in video production and graphics are being added next year. Your article was right on the mark. Students are very enthusiastic when they get to create video productions.