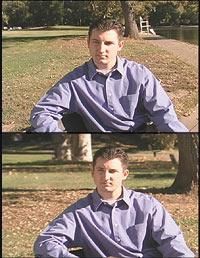 We Love to Flow

I am a video producer in Israel. My company specializes in videotaping occasions and business promotional videos. Through the years, I’ve been a big fan of your magazine. The truth is, about a year ago I was thinking of stopping my subscription, as Videomaker was not into the nonlinear field as much as I wanted. However, as you keep "flowing with the tide" your magazine covers all aspects of linear and nonlinear, analog and digital parts of video producing. Keep up the good work! Shalom from Israel,
Donny Wetzler
Internet

I just received my new subscription to Videomaker magazine and its great! I enjoyed the articles and tips from Joe McCleskey and Wendy Nichols (January 2000 issue). Joe had an article on creating optical effects and the ‘Hitchcock’ effect he described was worth the subscription price. Add to this, Wendy’s article on sound and, wow, it’s worth it!
I belong to a large Sony TRV900 users group and I’m about to make a recommendation for this magazine to the group. Anyway it’s a great magazine, and thought you’d like to know.
Dwight Anderson
Internet

Keep Up the Good Work Pedro

My name is Pedro Cordebello. I’m 19 years old and I love making videos. Since I was 16 I’ve worked for our local cable TV operator. At 17 I began to work with cameras. Since then I’ve worked with Betacam-SP cameras such as UVW-100, BVW-300 and BVP-7. I read some American magazines to improve my knowledge. Then I found Videomaker. What a great magazine! You have taught me a lot. I’d like to say thank you.
Pedro Cordebello
Sao Paulo, Brazil

Last year my wife and I decided to make a video of our sailing adventures in Valdez, Alaska. The first problem was our complete lack of knowledge concerning video production. I began scouring the newsstands for a magazine on the subject and was amazed at the information and advertisers contained in Videomaker. I subscribed. The camcorder reviews convinced me to go with Hi8 and another article helped me decide on Metal Particle tape. About this time reviews of edit decks came out in the magazine and I decided the Datavideo SE-200 with dual channel TBC-3000 time base corrector would fit my needs and pocket. We went sailing and shot and edited our video. I’d dreamed of doing this and thanks to Videomaker we did it.
Kevin and Ellen Balcer
Fairbanks, Alaska

I would like to know what I would need to put video on my Web site. How long can I run a clip of film and what will it cost me for the time I’ll need? I would like to do this from home.
Kenny Mason
Gainesville, Florida

Kenny,
You’re not the only one who wants to know how to get video on the Internet. Check out Tech Talk on page 8 of this issue for a complete explanation.
– The Editors

Corrections
In the February 2000 issue of Videomaker, our Best Products of the Year article should have listed the DPS Perception RT as winning the category of "Best Computer-based Turnkey Nonlinear Editing System $10,000 – $25,000." We incorrectly printed the DPS Perception’s list price as $4,995. The correct price is $12,995. We apologize for any inconveniences that may have been caused.

In the Turnkey Nonlinear Editors section of the March 2000 All Computer Video Buyer’s Guide the systems manufactured by DVLine were incorrectly listed as having processor speeds of 733MHz. The prices listed represent DVLine Turnkey systems with 550MHz processors. A 733MHz processor is available as an upgrade at an additional cost.
-The Editors