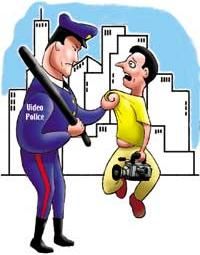 I have recently returned from a trip to Chicago. I had my two camcorders with me and I did get some great videos. However, I was thwarted at several places by what I consider to be an almost neurotic resistance to video pictures being taken.

My first problem was at the Chicago Art Institute. I was required to check my video camera, although non-flash photos are permitted. I can understand the prohibition against the use of flash; since light can, over time, damage paintings. However, I can not understand the barring of video cameras. I met the same problem at the Chicago Tribune building. The worst problem I had was at the Quaker Oats building, where I was ordered off of the premises by a security guard who resented the fact that I started asking questions about the rationale of the no-video policy.

As we all know, if I wanted to shoot video of any of these places badly enough, I could have done so with a mini camera without anyone the wiser. It seems to me that these places should be educated to the fact that improper use of video can take place regardless of any ban that might exist. This kind of restriction against using a camcorder only penalizes the honest person. I would concede, as an attorney myself, that there may be some legitimate concerns regarding the improper use of video. One answer could be a simple release form, signed by anyone who wants to shoot video, stating that the footage will not be used professionally, will not be released to a competitor, and is strictly for the private use of the videographer.

I am sending copies of this letter to the Chicago Office of Tourism, as well as to the three buildings where I encountered problems. I am asking each of them to review their anti-video-camera policy, as it makes absolutely no sense to me.

Thanks For the Tips


Just wanted to take a moment to comment on the magazine. I have been reading it for about two years and I’ve thoroughly enjoyed it. Video is just a hobby for me, although I did just shoot my first wedding, using tips I got from Videomaker. The father and mother of the bride were impressed with the results, which are due in large measure to the tips I got from your magazine. The articles on sound, lighting, composition, tripods and editing were very helpful in this first project of mine. Please extend my thanks to your team for a job well done. I’m looking forward to attending one of your workshops in the future. Until then, please continue the excellent work.


I’m a big fan of your magazine and read it on a regular basis. I have done a ton of research on Hi8 and DV camcorders and I’m still on the fence as to which way to go (money issues). In my research I was impressed by the Canon ES4000 in that it had so many manual features lacking in most other cameras. And yet I don’t see mention of it often. Had it been included in your Buyer’s Guide (see the August 1999 issue of Videomaker), it would have been the only Hi8 in that list that would have gotten a "y" (yes) for all the manual features. On top of that, it has mike in and headphone out.

Obvious question is, why would it not be included in your buyer’s guide? Am I missing something? According to my findings it seems to be one of only a few cameras that has all these manual features, which is important to someone that is fairly serious about a career path that includes working with video production.

Thanks for your inquiry, Neil. Although you may be able to still find it in stores, the ES4000 has been discontinued by Canon. In all of our Buyer’s Guides, we list only the current models that a manufacturer produces. Often, manufacturers will stop making a model but they will still offer it in the market until inventory dwindles. You can, however, find it listed in last year’s 8mm and Hi8 Buyer’s Guide on page 77 of the September issue.