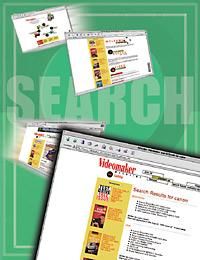 For years I’ve enjoyed looking for mistakes in movies and TV shows, which is why I’m writing in regards to Chuck Peter’s article The Invisible Man Special F/X in the July issue of Videomaker.

The first time I saw the TV show it was obvious they used chromakey for the effect. As you should notice right away from the picture in your article, when you cover the man’s face with the blue material, it blocks the back of his collar and the back of his coat sleeve, leaving the background picture where the clothes should be.

The TV show tried to cover up this flaw by having David McCallum wear turtleneck sweaters all the time, but when he leaned forward, the sweater had no back.

You can, of course, digitally fill in the missing parts as they did in the film, Memoirs of an Invisible Man. But this film had its mistakes as well. For example, Chevy Chase was supposed to be invisible, but there were a number of scenes where you could see his shadow when he was walking. They had a good effect where he was smoking and you could see the cigarette smoke going in and out of his lungs. However, they overlooked the fact that he was talking at the same time he was inhaling smoke.

I enjoyed your article, but I think readers should be aware of the pitfalls to avoid while using this effect.


I just registered on your new Web page Club Video. I needed to find some articles that I remembered seeing over the past years. I found them with no difficulty. This is a great tool.

I have been a subscriber for more than 10 years. You have the best magazine and now have the best Web site. Thanks for all you do for us.

A Transformer Could Save the Day


As a subscriber to Videomaker, I enjoy the variety of articles that you include in your magazine. I have a couple of comments regarding Sarah McConnell’s article, Five Tips to Tote Your Gear, (see the June 1999 issue of Videomaker).

A few years ago a group of us went to England to do some video work. We picked up our rental vehicles at the airport and headed up the road to a castle. We jumped out of the cars with camcorders in hand and headed into the castle to do some sightseeing. When we returned to our cars an hour later, we discovered the doors open and the camcorder cases with battery chargers gone. Luckily we had the camcorders with us.

Unfortunately, after a few short days of videotaping, the batteries died. We had no way of charging them. Later when we attempted to depart and head home, we were detained by airport security because we could not open the camcorders and turn them on to prove they were working video units and not bombs.

Eventually another traveler with the same camcorder came through and lent us a charged battery so we could show that they did indeed work. Our experience certainly endorses Sarah’s point about security.

I’d like to add something to her third tip, Keep the extras to a minimum. Many other countries use a different electrical standard than the one we use in the United States. A small transformer along with a set of plug adapters is very useful in recharging your camcorder batteries or using the A/C power to run the camcorder.

Don’t worry, Troy, you won’t have to make an appointment with your optometrist anytime soon. What you read is true. At this point DraCo has not announced a specific shipping date, but company representatives have said that their new editing units will be available before the end of the year.