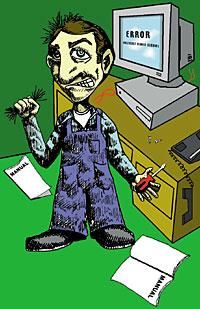 A while back, I purchased and successfully installed the Matrox G-200 TV AGP card on my Pentium II 333MHz as my TV tuner/video capture card. That, bundled with Ulead’s MediaStudio Pro 5.0 VE, gave me the basic tools I needed for my nonlinear editing purposes.

Then I read your enthusiastic article (Benchmarks, May 99 issue) about a device-control module by Videonics that would allow me to batch capture my video footage. Like most people I know, I find the media capture to be the most tedious part of editing. I jumped at the chance to batch digitize from my Sony DCR-TRV99 Hi8 camcorder.

First, however, I was told by Ulead that I would have to upgrade to MediaStudio Pro full version in order to use device controls, since the version VE did not have those capabilities. Okay, another $150. Then I purchased MediaMotion for yet another $170 or so. Over three hundred dollars later, I still had no success.

Although I installed MediaMotion and could control my camcorder from my computer, I could not get Ulead’s MediaStudio Pro 5.2 to recognize my capture card or batch capture video.

I called Videonics. They said it was a software problem. I called Ulead. They said their capture module of MediaStudio Pro 5.2 did not work with Matrox G-200 card, yet nowhere was that noted, either in documentation or online! Matrox seemed intrigued but only offered to help get a driver to make everything work together. Since then, I have gotten nowhere.

I believe your magazine shares part of the blame, since your glowing review prompted me to take this path, but you did not mention that the whole system was not compatible if one was using the Matrox card. I request your help in solving this dilemma and I hope you publish this so others won’t be as quick to take a recommendation from you without further research.

We sympathize with your troubles. Although MediaMotion worked well on our test system, we cannot predict how well any computer product will work on any other system. This is due to the wide variety of hardware and software available on the computer market. It would be virtually impossible to test each possible computer configuration.

We failed to report that our test system used the Matrox RainbowRunner digitizer. In the future, we will be sure to report this key component of the test bay. To clarify, our review did specify that MediaMotion supports MediaStudio Pro. We did not mention the VE version.

It looks as though Ulead and Matrox may have given you your answer, however. The driver Matrox offered for the G-200 card could very well "make everything work together."

The techniques I have learned from Videomaker‘s excellent content and seminars have contributed to my "making videos" as your recent editorial encourages (see Viewfinder in the March 1999 issue of Videomaker).

My projects have been primarily travel and artist documentaries. I work hard to make them interesting with good videography and thoughtful editing.

I’ve noticed, however, that many people seem indifferent to videos that aren’t rental movies. When I give my videos to these people and later call to see what they thought, all I get are excuses about why they haven’t seen them yet. I’ve found that if you sell people videos, they’ll value them more and take the time to view them. But if you give them away, they just sit there.

How do we get more people involved in this wonderful world of video? As videographers, our target, of course, is an audience.

We need to stimulate more desire for owning and viewing videos that aren’t just Hollywood rentals. Once we do this, there will certainly be more people making video.

In our Benchmark for the MXPro (June, 1999 Videomaker) we erroneously referred to the Videonics Video ToolKit as the Video ToolBox. We regret any inconvenience this may have caused.