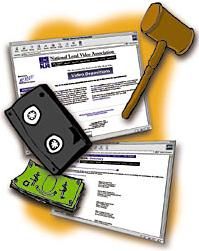 Thanks for the suggestion; we’ll take it under advisement. Admittedly, it has been awhile since we have covered depositions in our pages. The last story we ran on the subject was in our July 1996 issue. As you say, video deposition work can be a very lucrative field. It is not without its pitfalls, though. We’ve heard stories of both success and failure from our readers. We suggest that any potential video-deposition entrepreneur do his or her homework before going into the business. A good place to start is the National Legal Video Association (NLVA) at www.nlva.com.

I just finished reading the excellent article on PC Video ("Power up your PC," December 1998 issue). However, as the present owner of a Power Computing Power Center 150 Mac OS computer with a Miro DC 30 in my future (I hope), it was rather like a wine afficionado reading about a beer tasting: about all they have in common is the alcohol.

Since you are right in claiming that digital processing by computer is the wave of the future, can we expect an equivalent article telling us the pros and cons for the Mac OS on Macs and Mac clones in an upcoming issue? This platform is much more graphics-oriented than the PC, and does not carry the cross of a clumsy operating system.

I can upgrade the daughter board of my machine to increase chip speed from its present 130MHz to 220 MHz. I already have 160MB of RAM, which should be ample. I plan to add a multi-GB internal AV compatible (7,200 rpm) hard disk to use solely for video. I could use some guidance, as I don’t expect to just plug in the PCI board, load the software, and beat Steven Spielberg to an Oscar next year.

We suggest you check out the March 1999 desktop video buyer’s guide. This issue includes plenty of Mac and Wintel desktop video products.

I would like to add a few suggestions to Art Aiello’s "Getting Started" article in the January 1999 issue of Videomaker.

Art refers to 8mm running at 24 frames per second. This speed would indeed be unusual for amateur 8mm film. 16 frames per second is the speed for regular 8mm, 18 frames per second for Super 8mm. 24 frames per second is of course sound speed as in 16mm. Art touched lightly on making possible changes in the shutter design to reduce or eliminate flicker. On some machines this can be accomplished with relative ease; on others it’s not so simple because the shutter also serves as a drive pulley. As a caution, for example, it is impossible to modify some Keystone 8mm projectors such as the K-108 model, which features a one-blade shutter that makes three revolutions per frame.

Another piece of advice: in modifying a shutter, if more blades are needed than the original, the blades may not be wide enough to block out the light path for the full shuttle pull-down time. No problem; the shutter blades can be much wider than the open areas since the wider blades will only reduce the amount of light reaching the screen. When copying from a very small screen, light loss is not a problem.

Ideally, of course, the projector should be driven by a sync motor using a timing belt and pulleys.

By the way, no question about it, Videomaker is still the best video magazine on the market.