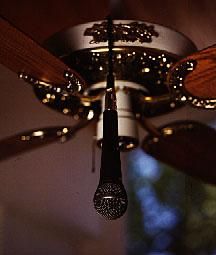 Reading about the woes of Paul and Alex
("In Box," December 1997) with their Bravado 1000 digitizer boards
prompted me to offer a story very like theirs. The lock-ups and the
jerky frames during playback all were mine too. After changing the
motherboard three times and the hard drive to Ultra DMA, at last I have
a system that is workable. It would be even more remarkable if it
worked as well as Truevision’s advertising leads one to expect.

Taken to the Tube

Thanks so much for Loren Alldrin’s article on video in worship centers
("Holy Video," February 1998). At our church, we do most
of the things that he described so aptly. However, we have taken video one
step further; we have a twenty-four-hour Christian television station
which broadcasts locally and is carried on cable. We receive programming
from Family Net, Worship Net, Praise, Cornerstone and independent producers.

A converted Sunday-school room is our studio, control room and office.
We use mostly prosumer S-VHS equipment including four S-VHS camcorders,
16 S-VHS VCRs, an MX-50 SEG, an MX-12 SEG, a couple of Titlemakers, and
a Digital Video Mixer.

This low power television station is duplicable for about $150,000 anywhere
you can get an FCC license. A more bare-bones station could be built
for under $100,000.

The article "10 Artsy Camera Tricks" ("Getting Started,"
January 1998) was very interesting. I enjoy making creative videos
and have been using the strobe effect, freeze frame (especially for ending
a production), out of focus dissolve, wipes and fades since the late 1980s. I have created some video art with the use of various types of filters
and received some stellar results. I love the dissolve and macro
mode more than any effect on any camcorder. I used it to create an
effect using a candle holder and a candle which won high plaudits
because it was an original effect.

I have encountered many photographers and videographers who are afraid to
venture beyond the ordinary, so their material is usually so borrrring.

When I was looking for magazines about video, I could find very little where
I live in Iowa. Only after I checked into your Web site (www.videomaker.com)
did I know how and where to send for a subscription. Thank you for hosting
this site. It has provided very valuable information for me in my start-up
video editing.

I’ve learned a lot from Videomaker in the past few months. My original
plan was to do video editing for home use; now I am trying to make video
for the program I teach at a community college.

I enjoy the reviews in the magazine and the editing tips. Keep up the good
work.

While you occasionally devote space in your fine magazine to the pursuit
of profiting from the creation of video, I appreciate that you don’t neglect
your readers who create video for other reasons.

For example, I create video as a way of improving the quality of life in
my community through the public access channel of our local cable television
service. It is a welcome resource, and my videos of local concerts, lectures
and public events are always well received and appreciated. I have also
become the resident videographer at our local museum and historical society.

Therefore, please continue to include in Videomaker some articles
about the many opportunities there are for non-commercial videographers
to be creatively involved with their local public access channel and community
organizations.

You’ve got it, Rod. See the profile of Sara Pellegrino in this issue.


Loren Alldrin mentioned in "The Invisible Mike" ("Sound
Track," January 1998) that the only limitation to mike placement is
our imagination. Well, my imagination really started running when I saw
where the mike was placed (hanging from an overhead fan) in the picture
on page 31. If someone gets too warm and decides to cool things off, you
may want to keep the camera rolling. I’m sure America’s Funniest
would be happy to air the footage. Great article in spite of the chuckle.