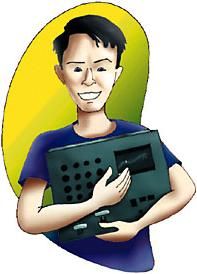 I work with video in schools and usually purchase full-size VHS camcorders
for their durability and ease of transfer to standard VCRs. We have occasion
to make frequent use of an external mike to improve our sound pickup. On
my last trip to the local consumer outlet, I found that the manufacturers
are no longer including the external mike jack on many low-end camcorders.
What’s the deal? Is it no longer considered a valuable option? What are
we to do?

Although mike jacks are rare on VHS-C camcorders (JVC, Panasonic and
RCA each make one model with a mike jack), Canon, RCA, Samsung, Sharp and
Sony often include them in their 8mm models.

I enjoyed your article, "Time Code is on Your Side" (September
1997) but I found a discrepancy. You mention putting time code on the linear
track of VHS and S-VHS tapes, but state that you can’t put time code on
the hi-fi tracks. I work in a video post-production house and we record
time code regularly on the linear and hi-fi tracks. I also wish that you
had gone into more detail about when to use drop-frame versus non-drop-frame
time code in an editing situation.

You’re quite correct; in the VHS family of formats, time code can
be recorded onto either the hi-fi or the linear audio track. (For that matter,
it can be recorded onto just about anything that can record an audio signal.)
Making good use of this system, however, requires a fairly elaborate (and
expensive) editing environment. Most low-budget video editors who work with
S-VHS use the linear audio track for time code, retaining their original
program audio on the hi-fi tracks. Then, when the visual edit is complete,
it’s an easy matter to perform one final audio dub of background music and/or
sound effects over the time code on the linear audio track.

As for when to use drop-frame and non-drop-frame versions of time code:
if you’re editing short sequences, such as news footage or commercials,
drop-frame time code isn’t needed. If you’re going to broadcast something
that’s fifteen minutes or longer, however, you’ll need to use drop-frame
time code to keep the total length of the program accurate to within a fraction
of a second.

I’m curious about the story, "Breaking In With Breaking News,"
(October 1997), about the man who shoots video and gets paid 25 bucks by
the TV station. I want to know how the guy can afford to buy equipment on
those low wages.

Most small-market TV stations do not have the budgets to support freelance
videographers. When Chuck Dennis began his freelance news video "career"
he was looking for experience and a way to get involved in his community.
Of course, now that he’s working full-time for the station, he gets a regular
salary.

Matt York’s "While-you-watch-it" editing concept ("Viewfinder,"
September 1997) reminded me of an old film versus video conflict. I don’t
know who it was, but about 6-8 years ago I saw a clip in which a famous
filmmaker was talking about the relative merits of 8mm home movies versus
the new home video technology. He was talking about unedited footage, of
course. In summary, he said that on the average, the old 8mm home movies
were better than the home video being produced now. The main reason was
that the high expense of film forced most home moviemakers to shoot short
scenes. On the other hand, the cheapness of videotape allowed videographers
to shoot boringly long scenes.

I use a multi-track recorder for producing great-sounding audio for video
production. There was a short bit on multi-track recording ("Sounding
Good: Videomaker’s Guide to Audio Recorders," August 1997) however,
I think you need to tell your readers more about it. It is fun to add Hollywood-style
special sound effects to your home videos.

A four-track recorder is a wonderful addition to any video studio. You can
add multiple layers of sound effects and also beef up the camera or microphone
audio with the equalizers on the recorder. You can record more than four
tracks by "ping ponging." This is a technique of adding recorded
materials together to use up fewer tracks. I think multi-track audio recorders
should be added to the video studio "must have" list. They work
great!