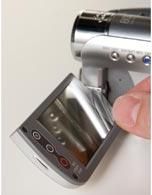 Outstanding Return on the Investment

I thoroughly enjoyed [the] workshop this last weekend on DVD authoring. Not only did I receive an outstanding return on the investment for my time in terms of better understanding the processes involved in editing and DVD authoring, I also received some outstanding tips from you in terms of facilitating a small group learning process. I have been a professional (paid) speaker since 1981; in addition to speaking, I attend a large number of presentations each year to continue to hone my speaking skills. It has become an extremely rare event for me to return from a presentation so energized by, not only new and useful information but also, outstanding facilitation skills. Your workshop was such an event! I learned a great deal from your extremely subtle and encouraging techniques in which you solicited participation from the most reticent members of our group, affirmed the accuracy of what we were understanding, and redirected what we didn't quite have clear understanding of. Very nicely done! Thank you.

Have an Excellent Day!

You people baffle me. On page 48/49 of the 2005 [Winter Edition Special Issue] Buyer's Guide, you show a Macintosh G5 and Apple Cinema Display being whipped out of their boxes for instant editing. Then comes Pat Bailey's article that contains neither of the words Apple or Macintosh or iLife or iMovie or iDVD.

Likewise, the manufacturer listings lack any reference to the top turnkey system currently available. I cannot believe that this is an oversight. Of course, Apple doesn't appear in your advertisers index, either. The result will assuredly be the same as in previous years: my acquaintances buy this stuff and THEN ask me how I make such great videos and DVDs when their "systems" fail to perform as desired or are so hard to learn that they give up.

I have been a subscriber to Videomaker for quite a few years now and my subscription runs 'til Feb. '09. So a threat of non-renewal doesn't count for much. But I do hope that in the future you will resort to some slightly more balanced reporting.

Thanks for taking the time to email us with your concern. Apple's absence from the Buyer's Guide is not an oversight. As we’ve mentioned in the past, the disclaimer at the bottom of all of our Buyer's Guide grids states that data in the grid depends on feedback from the manufacturers. Some companies (and their PR firms) are better at getting back to us than others. If we can’t get a reply, we can’t print their information.

Now before commenting on the Mac coverage in our magazine, let's look at some numbers (with a grain of salt, as most statistics are fuzzy at best):

60% – Videomaker magazine editors who own at least one Mac

20% – Videomaker magazine readers who edit on a Mac

We are very conscious about the coverage we give Apple hardware and software in Videomaker. Since November 2003, Apple has received nearly 200 distinct references within the magazine, all editorial, which is not bad considering that only one fifth of our readers use a Macintosh.

Apple should have been mentioned in Pat Bailey's article and that was an oversight by the Videomaker editors. Apple's video editing software is very popular and by definition, all Apple computers are considered turnkey (the ability to edit audio and video out of the box without the need of additional software or hardware). Thanks for bringing this to our attention. We will try to be more careful with this issue in the future. (We hope that you noticed that Apple did make it into the March 2006 Editing Computer Manufacturer Listing, too.)

We're happy you will be with us for a few more years, Wolfgang.