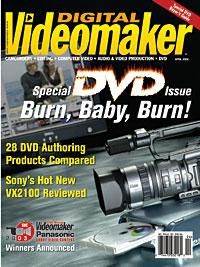 Left? Right?
I have subscribed to your magazine and received the first issue (trial), I wish to know how to obtain my refund since I paid for this year subscription. I thought I subscribed to a video magazine, not a political channel outlet. I am interested in videomaking and not a magazine’s political views, Left or Right or of its staff. Please notify me of my full refund procedure. Thank you.

I am sorry to learn that my April 2004 Viewfinder column offended you. I can’t quite figure out how you misunderstood the point of the column: to inspire ordinary people to get back into politics by using their video gear. Neither the magazine, nor the column was pushing a particular political viewpoint.

Theodore, there’s nothing in that article that pushes any political agenda down your throat. The vision of our company is to "work towards an era when anyone can express himself in the medium of video and can easily find and view the video expressions of any others. Further, we want to see a time when everyone is so aware of the powers of the video medium as to make informed choices regarding its production, distribution and consumption." The Mission of Videomaker is to empower people to make video. We do this by communicating information about tools, technology and techniques in a way that inspires, encourages and equips for success.

I encourage you to reconsider your request for a refund. I must warn you however, that this is not the last time that we’ll be providing coverage on people using video during an election year. In fact I am working on another article right this minute. Voting is only half of a democracy and there are many sham-democratic countries around the world that have plenty of voting, but no freedom. The other half of a democracy is the freedom to vote for whom you want and the freedom to hear all points of view. And that’s where you, I, and our video gear enter the fray.

D8 Disappointment
Responding to the Zoom In note on page 14 of your April issue, I ordered the Sony DCR-TRV460 in hopes of having a backup for my wonderful (does everything I need) Sony DCR-TRV320. The basic features I was after were Digital8 (with tapes large enough to write labels on and find later), the ability to play 8mm, Hi8 and Digital8 into my computer, the ability to pass through analog to video signals from VCRs or other devices to my computer, a healthy optical zoom (20x), a microphone input, a top-loading tape door and a headphone jack.

For some reason, I expected the TRV460 to have all of these. When it arrived, though, I immediately recognized my failure to check it out thoroughly before ordering. It has a bottom-loading tape door, which I don’t like but was willing to accept. However, there was no way to get audio in except via the internal microphone. This made the unit unusable for me, and I returned it immediately – a cost to me, to the vendor and ultimately to Sony in terms of great disappointment in their ability to understand user needs.

I have a mini tape camcorder that does provide a microphone – but the old TRV is much easier to operate, as far as I am concerned.

What can we do to interest Sony (or any other manufacturer) in providing a good Digital8 camcorder with the desirable features listed above?

As you know, Sony is the sole manufacturer of Digital8 camcorders, since Hitachi ceased production of their D8s in 2002. Whether Sony plans to produce any D8 units for 2005 (or whether those that they do produce for 2005 will have features that appeal to advanced videographers, such as microphone inputs) will be revealed next year. Our guess, though, is that the money is in Mini DV. As all manufacturers’ Mini DV camcorder prices plummet, less profitable technologies like analog formats and Digital8 tend to get pushed aside. Notice how, once digital camcorders in general were first introduced, it only took about six years for them to become dominant in the camcorder marketplace.

Correction
The phone number for Serious Magic was incorrectly listed in the June 2004 review
of ULTRA. The correct phone number is: (916) 985-8000.