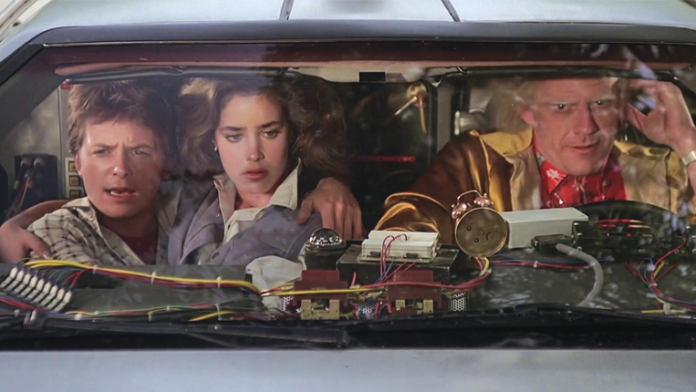 With quality cameras readily available to even the most novice shooter, what sets great storytellers apart from the average video producer is not superior image quality resulting from professional gear, but the attention to detail required to make meaningful images. To discover what matters in an image and to understand why particular images work the way they do, it helps to take a closer look at films we admire — to learn by example.

Taking the time to examine a film shot by shot is one way to improve our own work. This exercise not only exposes the techniques other directors and cinematographers have used in their work; it forces us to think about the demands of storytelling so that we may come up with our own solutions to creative problems we encounter on set.

To get started, let’s take a look at an iconic scene from the ending of “Back to the Future” (Zemeckis, 1985) — the scene in which Doc Brown delivers the famous line, “Where we’re going, we don’t need roads.” Specifically, we’ll take apart a particular frame showing all three characters — Doc Brown, Marty McFly and Jennifer Parker — squeezed together into the Delorean just before being propelled into the future for the next installment of the series. We can break this particular frame into several elements, beginning with the overall composition and placement of the characters.

In this frame, the windshield of the Delorean dominates the shot, creating a slightly smaller frame within the overall frame of the camera’s field of view. This serves to contain our three subjects within the vehicle and separate them from the rest of the landscape. The subtle reflections of the neighborhood trees on the glass further emphasize this barrier. This is appropriate since in the next shot, these three will literally leave their present environment and travel into the future via the Delorean/time-machine. Once they are inside the Delorean, they are no longer part of the average suburban neighborhood with which they are familiar, and framing them within the border of the windshield makes this particularly apparent.

Once they are inside the Delorean, they are no longer part of the average suburban neighborhood with which they are familiar, and framing them within the border of the windshield makes this particularly apparent.

Likewise, positioning Jennifer in Marty’s lap with arms wrapped around each other’s shoulders both links her more closely to Marty than to Doc, reinforcing their romantic relationship, and also identifies her as an addition to the time-traveling crew, someone who is literally being carried into an unfamiliar situation. While the windshield-border defines her as time-traveller, Jennifer is still not yet fully integrated into the team. There isn’t even a spot for her to sit independently.

Color also works to this effect. Red, a recurring color throughout the “Back to the Future” series, appears here in Doc Brown’s shirt and in some of the wiring on the Delorean’s dashboard. This choice in color palate lends visual cohesion to the scene and indeed to the entire film, where vivid reds and blues often complement each other to balance a shot. Similarly, the haphazard, DIY look of the time-machine is matched by Doc’s disheveled appearance, especially by his wiry and unkempt hair, which gives him an eternally electrified appearance appropriate to his character and occupation, further linking him to his invention.

Here, the red and gold that connect Doc Brown with the interior of the Delorean is balanced against the neutral greys, blues and whites worn by Marty and Jennifer, and by the steely grey of the Delorean’s exterior. This places Marty and especially Jennifer as outsiders to the Delorean, while Doc Brown can almost be seen as part of the device. Jennifer especially belongs more properly to the world they are about to leave.

However, Marty’s red t-shirt, partially hidden under his light plaid button-up, serves to link him more closely with Doc and the Delorean, while Jennifer’s attire, along with her confused look and positioning in Marty’s lap, shows that she is more or less along for the ride, not yet fully initiated into the adventure of time travel. She, of course, did not accompany Marty into the past, but she will go with them into the future in the next installment in the series.

All of these elements serve two purposes within the film. First, they create a well-composed image that is pleasant to look at. Second, they reinforce characterizations and plot motives, subtly directing the audience to the desired interpretation of events, whether they know it or not. This is what makes “Back to the Future” a memorable classic. A compelling plot must always be supported with compelling, thoughtful, intentional visuals. To get them, as storytellers, we have to pay attention to the details.