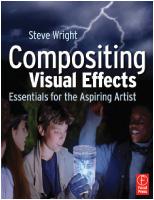 Steve Wright’s Compositing Visual Effects is an excellent overview of the compositing world for beginners. Comprehensive and a pleasure to read, the book describes the techniques necessary to make it in the rapidly-expanding world of digital visual effects. Don’t let the children on the cover fool you: this is not a kid’s book. Wright delves deeply into the technicalities of this computerized cosmos, while never forgetting he is aiming the book at entry-level compositors or those wishing to better understand the digital effects domain. He covers rotoscoping, wire removal, blue/greenscreen work and more in good detail. You get a better understanding of topics such as bit depth, compression and interpolation. Wright explains real-world situations, such as the work an entry-level compositor can expect and professional workflows in compositing houses. Rating: 4 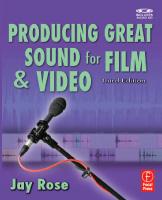 I have been looking for this book for 20 years – no exaggeration. Obviously, I was looking in the wrong places, as this Focal Press paperback is in its third edition. In the first half hour I skimmed through this book, Rose answered many of the technical sound questions I have accumulated over the last fifth of a century. In Rose’s own words, this book is an “overview of the entire audio process with a strong emphasis on sound at the shoot.” Jay Rose’s passion and many years of experience in the field show in this jam-packed tome. The simple black-and-white diagrams and screen shots do their job in reenforcing the sometimes deep technical explanations. Real-world examples and countless war stories from the audible front lines of the set appear alongside detailed solutions for regular sound challenges. Love the Frequently Asked Questions sidebars of common sound problems and their fixes. The chapter on Editing Voices alone is worth the $45 price tag. Rose’s many years writing for DV magazine show in this well-written, no-nonsense, invaluable reference book that belongs in every video producer’s library. Rating: 5

I learn most new software programs using DVD tutorials, and I wanted to like this offering on Apple’s Color, but I found many elements far too distracting. In the end, I had an idea of this program’s capabilities, but I didn’t feel I had learned to really execute the techniques explained. First, far too much of the video is a wide two-shot of professional Colorist Stuart Ferrayra and Apple-certified trainer and forum leader Noah Kadner in an all-white, Matrix-like room. The style was more like an interview than a single-person instruction, which didn’t work for me. I far prefer the Lynda.com or Ripple Training approach of video-screen capture showing every mouse movement with detailed voiceover. When we did get close to the screen, the mouse movement was jittery, and cutting to and away from closeups left me disoriented. Script and pre-production could have been more organized and fleshed-out. These two filmmakers are clearly knowledgeable, but this tutorial’s is structure did not work for me. Rating: 2

Art of the Storyboard: A Filmmaker’s Introduction (second edition) 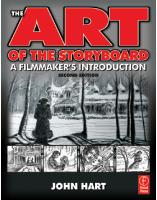 This is a valuable tool for those in film school or wishing to become storyboard artists. Fairly comprehensive though a bit scattered, it includes real-world examples, but more in text than images. My biggest problem with the 224 page, large-format tome is that Hart uses his own storyboard illustrations of well-known films rather than the actual storyboards. I was hoping to find the actual storyboards beside screen shots from the films they helped make. Paying for the rights to such art may have been prohibitive, but Focal Press has published such copyrighted art in its amazing Screencraft series. The book goes deep into art and film theory and technique, when I felt it could have stuck with storyboard nuts and bolts. A big bonus is the inclusion of links to webpages that show specifics of hard-to-explain techniques. Rating: 3