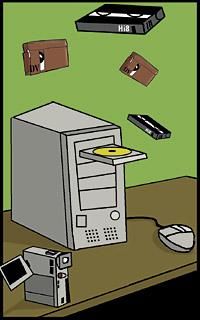 I found the article ("The Ins and Outs of High-speed Shutters" in the January 1999 Videomaker) interesting, and have been trying to figure out how to use high-shutter speeds on my XL1. Yet whenever I turn the shutter speed up, the viewer goes pitch black. This happens in broad daylight, so 1/10,000 would be impossible to obtain. What am I doing wrong?

Gary, it seems like your problem might be in setting the iris of the camcorder. When you make the shutter work faster, less light can enter the camcorder. If you open the iris more (by setting the camcorder to the lowest possible f-stop), you let more light into the camcorder, giving you enough light to produce a properly exposed picture. This will limit your depth of field, making focusing a tougher chore.

I am transitioning to digital video and nonlinear editing. I’m now shooting video with a digital camcorder. In the past, I’ve used 8mm and Hi8 camcorders and used a small editing system that is over eight years old.

My problem is that I’ve got more than 30 unedited cassettes of 8mm and Hi8, in addition to the 20 cassettes of digital video that I’ve shot this past year.

Most nonlinear editing software doesn’t care what format the original footage was shot with. The problem arises in the hardware. Most IEEE 1394 (i.LINK or FireWire) boards do not offer analog encoding too. That will be a problem for you. There are some systems, such as the FAST DV Master and Canopus DV Rex, that have both. You should also check to see if your DV camcorder will take analog inputs. If so, you could record your footage onto DV tape then transfer to the computer through a less-expensive IEEE 1394-only board. Also, the new Sony Digital8 format camcorders allow you to take footage shot on 8mm and Hi8 tape and transfer it through the i.LINK port of the camcorder to the computer.

I have a couple of Hi8 video cameras, and I’m wearing down the heads by editing with them. Is there a computer/digital nonlinear editing system that I can put at least one hour of video on, and then use the computer for editing without having to use the cameras?

I was filing some of my Videomaker articles when I noticed that in the Video Q+A page by Doug Polk in the August 1995 issue, Kevin Collier was advised to store tape with the full reel at the top, but Roy Wolcott’s article on tape storage in the April 1996 issue recommended storing the full reel on the bottom. Which position is right and why?

It should be stored with the full reel at the bottom, just for the stability. The important thing is to store it fast-forwarded to the end of the tape. That way, the tape must be rewound (or packed) before use. This will help assure even tension throughout the tape.