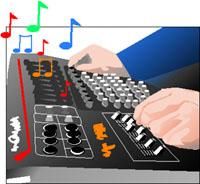 My husband plays in a heavy metal band. One of his friends has tried, on two occasions, to videotape the band playing live and the sound is horribly distorted. I’d really appreciate some suggestions I can give to this novice. I don’t know if he is using anything special to record the sound, just an RCA camcorder.

There are only three ways to get audio into your camcorder, the on-camera mike, an external mike, and a line feed from an external source (such as the band’s mixing board). You didn’t mention which method you are using. In the case of the on-camera mike, the band is probably overpowering it. He should try to shoot from as far away from the speakers as is necessary to get undistorted audio, using headphones with the camcorder to find that location. (see the Sound Track column in this issue). Unfortunately, that may mean no closeups unless you have a long zoom lens. Ideally, he should have them bring the sound level down while taping (but first, tell the audience what’s going on). Another good method would be to use a good external microphone, which is not as easily overdriven. Many professional microphones have an attenuator switch built in which will help to reduce the distortion by lowering the microphone’s output level.

I’m convinced that digital is the way to go … no regrets there. The rub comes from transferring from digital tape to analog VHS via the RCA cables. The dubbed image has a red bleed that is really annoying. My idea is to buy an S-VHS VCR and make my transfer from digital via S-video cables onto standard VHS tape. The result should be a VHS tape without red bleed.

Red bleed, or color smear,
is a problem inherent to the NTSC standard. Although you cannot
eliminate color smear, you can reduce it by insuring a good video
signal. When using an RCA cable to send a composite signal, make
sure it is a video cable (75-ohms impedance), and not an audio
cable. Most video cables are thicker and have a yellow RCA plug.
Buying an S-VHS deck will allow you to keep the luminance and
chrominance signals (Y/C components) separated as they go into
the record deck. However, when you use a standard tape the Y/C
signal is still converted to a standard (composite) signal for
recording. So there really is not a lot of difference except,
perhaps, for the better circuitry in the more expensive S-VHS
deck. However, just buying a new deck could solve the problem,
whether it’s S-VHS or standard. Your copy deck may be too old
to record a good quality signal. I suggest that you take your
camcorder to the video store and make some copies with the store’s
demo decks to check this out. Then buy the deck that gives you
the best copies.

I’ve been told twice by
local video store salesmen that pointing a display camera exactly
into its monitor to get that beautiful, psychedelic "video
feedback" swirl effect is bad for the camera. Say it ain’t
so! (Rotating the camera makes the effect even better.)

It ain’t so any more, Ken. In the old days (a little over a decade ago) video cameras used imaging tubes instead of CCDs and those tubes were easily damaged by bright lights. Shooting feedback shots of a monitor could burn a spot onto the tube if you held the shot in one place for too long. Fortunately, CCDs are not as sensitive to bright light and should not be bothered by shooting a monitor. So go ahead and shoot all the creative video feedback, swirl effects you want, and, for better results, keep the camera and the image moving.