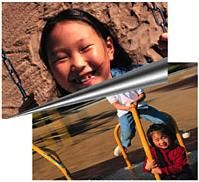 I recently bought a Sony DCR-PC7 MiniDV camcorder, and I am interested in
using the DV In/Out jack on the camcorder for nonlinear digital video editing.
I understand the need for an A/V SCSI hard drive and a DV capture card,
but wouldn’t I also need a separate hard drive for each source in an A/B-roll
setup? Otherwise, how is it possible to mix multiple video sources for transition
effects?

You need only a single A/V hard drive for transition effects in a nonlinear
environment. The secret weapon that makes this possible is rendering, the
process of re-drawing every frame of the video to achieve the desired results.
For example, if you wanted to create a page-turn effect between two moving
video sources, you’d first instruct your nonlinear editing software to perform
the effect exactly to your specifications, setting in and out points, duration,
etc. Then, when you hit the "Make Movie" or "Render"
button, the computer actually creates each frame of the effect, making use
of both source files (which usually exist on the same hard drive) plus the
set of instructions required for the specific effect you want (in this case,
a page turn). Rendering can be a very creative and powerful way to incorporate
video effects into your productions, but it can be very time-consuming–especially
when you’re working with material in the DV format. If you do decide to
go nonlinear, expect to re-live the old military adage: there’ll be moments
of intense excitement, punctuated by hours of boredom.

As a scriptwriter who’s working on a low-budget film, I am in the process
of determining what format in which to shoot. My greatest obstacle is cost,
so 16mm or 35mm film is out of the question. With this in mind, a recent
article I read about Haskell Wexler, a man who shot a documentary using
a consumer 3-chip DV camcorder, intrigued me. Now I find myself wondering
whether this is really a viable alternative to film. Will DV footage transfer
well to 16mm or 35mm film? Do film festivals accept this format? Will the
DV format one day become as common as VHS?

Many independent filmmakers are switching to a 3-chip DV camcorder as
their source format of choice, due primarily to the relatively low cost
of the technology in comparison with the quality of the output. Nonetheless,
there are a few things you should be aware of before you make the leap.
First, if you’re planning to transfer your footage to 16mm or 35mm film,
don’t expect the output to look like it was shot on film–it won’t. It will
look much better than if it were shot on S-VHS or Hi8, but the bottom line
is that video (even DV video) lacks the resolution and subtle gradations
of contrast and color that make film the top choice of professionals to
this day.

As for the public acceptance of the DV format–well, the sad fact is that
most people still haven’t even heard of DV, much less considered replacing
their home VCR with a DV unit. Luckily, however, it’s an easy matter to
transfer DV footage to VHS, S-VHS, Hi8, Beta, or any other format for entry
into film festivals. Independent videographers: keep your eyes posted to
the Quick Focus section of Videomaker for festivals and contests
to enter, and be sure to let us know how your projects pan out.

I’m confused. Could you please tell me what’s the difference between
a video mixer, an edit suite and an editing VCR?

Don’t feel bad, John–it’s often difficult to sort meaning out of all
of the industry jargon that gets thrown around in the consumer video arena.

A video mixer (often referred to as a special effects generator or SEG)
has one primary purpose: to smoothly switch between two moving sources of
video. This is a bit more difficult than it may seem, because in order to
switch between two moving sources of video, you first have to make sure
that the sources are in precise synchronization with one another–not only
on a frame-by-frame level, but right down to the level of the moment when
each line gets drawn on the screen. Video mixers often incorporate a number
of special effects and audio controls as well.

An edit suite is nothing more than the place you keep all of your editing
gear while you’re using it. It’s also synonymous with edit bay, and can
be used to refer to the gear itself: "I have two source decks, a video
switcher and an editing VCR in my edit suite."

It’s a bit trickier to define what exactly an editing VCR is. Simply put,
it’s any VCR that incorporates one or more editing features–a flying erase
head, jog/shuttle controller, edit control protocols, time code, audio/video
dub, insert edit, etc. At the very least, an editing VCR should have a flying
erase head (for smooth, glitch-free edits) and a jog/shuttle controller
(to rapidly and precisely locate scenes or individual frames on a tape).
See our May 1998 issue for a buyer’s guide to editing VCRs.

Our school is looking to buy some video editing equipment. We have $1300
to spend, and we have plenty of TVs around to use for monitors. What should
we buy to get our students started in video editing?

I suggest that you look into purchasing three items: a camcorder with
control-L (Hi8 if you can find one at a good price), a simple computer-based
edit controller (such as the Pinnacle VideoDirector Studio 200 or Videonics
Video Toolkit 3.0), and a good, basic VHS VCR with a flying erase head.
This assumes that you have at least a PC-compatible computer available (almost
any, even a 386, will do the job). If you don’t have a computer, consider
a simple editor like the Videonics Thumbs Up! 2000. In any case, a basic
system like this will allow your students to focus on the content and produce
some pretty amazing programs. If they’re good enough to win some awards,
they may even gain the right to brag that they did it all on a $1300 system.