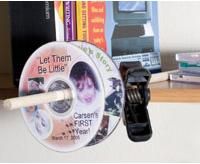 I realize that all the new fancy high-end ink systems touted by the manufacturers dry fast and forever. But sometimes when I am printing directly onto DVDs or CDs, I want to let them have some extra quality time with dry air rather than put them right into a case. I have a small dowel clamped horizontally to a shelf by my printer. When the printer is finished with the disc, I hang it on the dowel for some extra dry time.
John Dietrich

I have three video cameras, each with multiple batteries. I write an initial on the outside of the battery for the correct camera, such as "C" for may Canon GL2, and a number "1". On the inside I write the date of purchase. This way it is easy to know which battery is the dead one, which is likely to fail next and when I have an assistant on the team, he can grab the correct battery from the box.
Jim Warner

Mirror, Mirror on the Wall

Here’s a tip I discovered by accident. I just moved into a new home, and the bedroom I designated as my office was the former owner’s gym and dance studio. The walls were covered in mirrors that I planned to remove "someday," but never got around to it. Now I’m glad I didn’t. While I have a dedicated editing computer, my NTSC monitor and set-top DVD recorder aren’t dedicated to the one computer. As a result, I’m often moving cables between systems. Having the mirrors allows me to see my hands and the cable inputs without having to squeeze myself behind the decks or computer when I’m moving equipment or cables around.

A couple months ago, I had to hook up my old VHS deck to capture some video. With the mirrors in place, I could verify that the TV had a picture without having to walk around to do a visual check. This sure saved me some labor and frustration!
Kathleen Carole

After watching several behind-the-scenes shorts I’ve noticed that there is frequently a person near the camera dedicated just to focusing. I’ve also read in your magazine that we should avoid using the auto focus for critical shots. So on one of my first paid jobs, I asked a professional local camera operator friend of mine to give me a hand.

Much to my surprise, the first thing he did with my Sony VX2100 was whip out a long pencil and a rubber-band. He put my camera into manual focus mode and proceeded to stretch the rubber-band around the focusing ring, sliding one end of the pencil through the band — this was his "magic wand" trick. He focused on where our talent would stop after walking toward the camera and positioned the pencil so that it came to a firm stop against the camera handle at this end point. Sure enough, he was able to keep our talent in perfect focus even on a rather tight shot — even after the 12th take!
Craig Peters

Every good videographer always packs a bag full of every possible piece of equipment needed on a shoot. So we don’t forget, we might make up a packing list that includes camera batteries, mics, tapes, pens for labels, lens cleaner and soft cloth, clothes pins, etc., but there are some things we might not think of that are good to take along.

I always carry a first aid kit with the basics like bandages, sterile pads, and tweezers, but if you’re traveling with crew or talent, you might also think about aspirin and over-the-counter allergy pills. Even if you don’t have allergies, you never know what you’ll encounter "on location".

We once had an on-camera talent suffering badly from some unseen pollen–her eyes were so puffy we had to stop the shoot. Another time I walked unknowingly into a house full of cats and the room sound "ambience" was me behind the camera sniffling every few seconds. Now I always make sure I pack allergy meds, along with calamine lotion and sunscreen whenever I schedule cast and crew for a shoot.
Timothy John