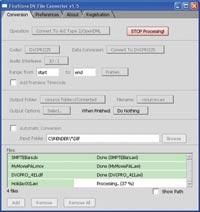 Q. I am about to move back across the pond from England and will bring my recently-purchased Canon MVX1 with me. I guess I knew this before, but the video standard in the US (NTSC) is not the same as over here (PAL). What are my options?

A. Playback may be very simple: we have seen a number of PAL camcorders that actually have a menu item to change the output to NTSC or PAL. We have also plugged NTSC camcorders into PAL televisions and had it work, at least adequately, with no adapters. In any case, it is worth a try.

The editing situation is both simpler and yet more interesting. First, most editing software will have no trouble capturing PAL DV footage over FireWire. And most editing software will allow you to mix NTSC and PAL footage with MPEG video, still photos and stranger things. It should all work without a second thought, although we have seen PAL bugs in early versions of software developed in this country from time to time. The interesting part comes when you output your project. In your project (or output) settings, you will be able to select which format you want to render your project out to. You will probably want to output a PAL DV archive version of your project, since that will be the least-altered (and highest quality) version of your movie. But you won’t be distributing on DV. If you have access to an NTSC DV camcorder, you can use your software to render the project to NTSC, dump the video to the camcorder via FireWire and then to VHS tape from the camcorder.

If you are going out to DVD, the situation is much more interesting. Of course, your DVD will need to be in the NTSC format, but you can actually render the project at different frame rates. The highest quality output, again, will be the one that changes the source video the least and this may well be a 23.976 frame rate using a 2-3 pulldown. The definition of that is rather complex for this short answer, but if you are using the fairly common Main Concept MPEG encoder, you can just select this frame rate from a drop down list. The MPEG-2 DVD video will be close to your original, but your NTSC DVD player will be able to output this as NTSC video for televisions in this country. (Incidentally, many DVD players can play both PAL and NTSC DVDs: the situation is not as complex as different analog tape formats.)

Finally, for larger-scale productions, Focus Enhancements publishes a software package called FireStore DV Standards Converter ($299) that will quickly batch convert video files between the NTSC and PAL formats (among others) while maintaining the highest quality.

Q. I have a question regarding my editing software and capture device. I use the Dazzle DVC-80 to capture video and Video Explosion to edit. Unfortunately, when I capture from my Sony Handycam (TRV608), it gets pixilated and is low quality. Originally, the DVC-80 runs for $70, so I kind of expected better.

A. Your Sony TRV608 Hi8 camcorder shoots a great image and Video Explosion uses the same software core as the professional Vegas video editing software, so we know that isn’t your problem. So, it must be the Dazzle DVC-80. It doesn’t sound like there is anything wrong with the product, you are just expecting too much from it. The DVC-80 captures video over a USB 1.1 connection, which is a much slower connection than newer USB 2 or FireWire. Therefore, although it captures at a full 30fps, it is limited to a resolution of 320×240, which is about half of your TRV608’s potential.