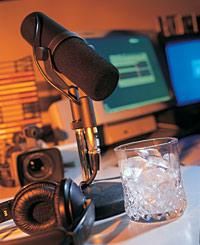 Video is a medium for the ears as well as the eyes. Sound effects bring a greater degree of reality and believability to your pictures. Next time you go to the movies, listen as closely as you watch.


Imagine a scene where a man opens a door and enters a living room. He walks across the living room to the bar, flinging his coat onto a chair on the way. He drops some ice into a glass, opens a bottle and pours himself a drink. Then he settles into his favorite easy chair, swirls the ice in his drink and takes a sip. He reacts to an off screen sound and turns to see his wife enter the room.

It may come as a surprise to you that most of the sound accompanying the movies you see was not recorded on the set with the picture. On the set, the sound person’s job is to get good, clean sound of the dialog. Filmmakers often choose to exclude the background and incidental sounds to maintain quality and continuity. These sounds are added later in a sound effects studio.

Modern sound effects artists (called Foley artists) work in special studios with a variety of surfaces to walk on and huge number of props to handle. It usually takes about three weeks to create the sound effects for a feature film, making at least three distinct tracks for a given segment of film. There is a "Foot" track for footsteps, a "Specifics" track for overall sound effects and a "Moves" track for the sounds of clothing and movement.

You don’t have to be a major studio to give your videos a big budget feel. You can improve the perceived quality of your productions by spending a little extra time on your sound track. Sure, your lavaliere mike may have captured crisp dialogue, but adding footsteps, ambient noise and other sound effects will make your video feel more like a feature film. Creating Foley sound for your videos is easier than you might think. You might have everything you need already. Let’s begin by taking a look at the equipment you need and then breakdown the three tracks and how you create them.


Setting up a Studio

To get started, gather the following equipment in a quiet room: