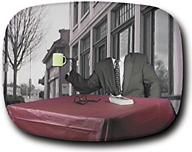 You might remember the classic TV show The Invisible Man, about an English scientist, Dr. Peter Brady, who discovered a way to make himself invisible. Episodes featured floating coffee mugs and clothing worn by a transparent figure. In 1959, making a man invisible on-screen was a challenging task. Today, it’s really rather easy. In fact, with a video mixer or a nonlinear editor, it’s a snap. The key is to use a video processing device that has a chromakey function.

Chroma is the Key

Whether you realize it or not, you are familiar with chromakey technology. It’s what TV news channels use to place weather people in front of a variety of computer-generated weather maps. In essence, chromakey allows the user to select a color (any color) in a video image and make it transparent, replacing it with a layered image. Typically, the weather person stands in front of a bright blue or green wall. The bright color of the wall is electronically selected as the "key" color.

A neat thing about chromakey is that the electronics involved do not distinguish between a colored wall and a shirt of the same color. So if the weatherman wears a shirt the same color as the background, his chest becomes transparent, and the viewer can see the middle-Atlantic states right through his stomach. That’s probably not what most news stations are shooting for, but it may be just what you need. By covering any exposed skin (say a person’s face, arms and hands) with bright blue or green fabric or makeup, and placing him in front of a background of the same color, you can make your actor appear to disappear.

To pull off the illusion, you’ll need to choose an appropriate environment for your invisible actor. This location could be a computer generated "virtual" set, a pre-recorded videotaped location or simply a camcorder pointed at a postcard. We chose to use two camcorders, one directed at our subject (in the chromakey environment), the other pointed at another wall in the same room. By placing a small table with a few props on the chromakey set with your actor, he’ll be able to interact with the environment, and the illusion will be all the more believable. The important thing is to cover not only the wall behind your actor, but the floor he’ll stand on as well. If you don’t want to paint a section of your home an ugly chroma color, a large roll of colored paper will work just fine. It’s essential that the color of your background and the color of the material used to cover the actor’s face and hands are the same. Inconsistencies in color will result in poor keying and a shoddy effect.

With everything in position, simply activate the chromakey feature on your mixer (or record the scenes to tape and combine them later using a nonlinear editor). Adjust the key-color to match the chromakey-colored background and the actor’s matching key-colored flesh, and the effect will be complete. Your actor is now invisible, and your viewers will go nuts trying to figure out how you did it. See you next time! Well, maybe.