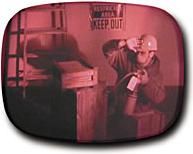 Ok, so your next video calls for a heroic factory worker to rescue a frightened little boy who is trapped in a burning building. You have the factory worker, the boy, the building and a pack of matches, but somehow you just can’t bring yourself to torch the family dwelling. Besides, you’d only get one shot at it. You couldn’t really be sure that your friend Sam would hit his mark, and the kid’s mother (your wife) is more than a little concerned about scorching little Tommy. So what are your options? Rewrite the script so the hero rescues the boy from a house with a musty odor. Or, pocket your matches and simulate the inferno using this creative effect.

You’ll need to gather a few materials to pull off the effect. At the very least you’ll need two video lights on stands, a two-foot by three-foot piece of fabric, a three-foot wooden dowel and some red and orange colored light gels.


Begin by cutting the fabric into strips, but not through to the top. Cut instead in a comb-like fashion. Don’t worry about making the cuts exactly the same or perfectly straight either. Imperfections like these will only add to the realism of the effect later. Next, attach the solid end of the fabric to the wooden dowel with a few staples or thumbtacks.

Position one of your lights off-camera and attach the orange gel. Position it so it casts its orange light in the direction you’d like the fire-flicker to be seen. Be sure there is no white "spill" light seen in the shot. You may need to use barndoors or a flag to block non-orange light from the scene. As always, it’s a good idea to view your lighting setup on a color monitor so you can know exactly how it will look on tape.

Attach the red gel to the second light and position it so that it too shines on the scene. Hold the dowel with the cut fabric in front of the red-gelled light. As the light shines through the comb of cloth, it will cast fingers of red light onto the scene. Moving the dowel back and forth causes the fabric to sway, and the colored light to dance like fingers of flame.

To make the blaze seem more like an inferno, you might consider adding a little smoke. While the pros use specially designed smoke machines, you might make due with a stinky cigar or two. Invite over some Stogie-smoking friends and let them puff awhile, then create the effect as described above. Have your cigar puffing pals fan the smoke so it moves through the room. Moving smoke is more realistic than the stagnant variety. Of course, this works best in a small room, as it will fill with smoke faster than an auditorium. The smoke adds fullness to the effect and adds to the illusion that your talent is actually in a blaze and not just sitting near a fireplace.


To really sell the effect, you’ll need to reinforce your special effects smoke and lighting with sound. If you’ll be editing the scene, you may choose to add sound from a CD in post production, but creating your own crackling fire sounds can be as easy as crinkling cellophane near your camcorder’s microphone. Remember to ride these levels high in the burning building scenario as raging fires tend to be loud.

Hey, do you smell smoke? Where’s Tommy? Quick, somebody get that camcorder.