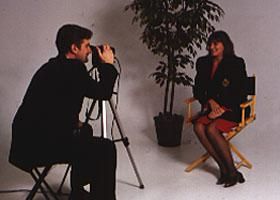 The secret to staging remote interviews
is not a network television budget.

You see it all the time. A network news anchor turns to a nearby monitor
and interviews a special guest live via satellite from a city on the other
side of the world. It’s a feat that requires billions of dollars of sophisticated
equipment. For this conversation to take place, the interviewee’s image
and voice must be converted into digital information, shot into space, bounced
off an orbiting satellite, then received and decoded by the network. At
the same instant, the network shoots back the voice of the anchor so the
two people can communicate. Meanwhile, the production crew broadcasts glitch-free
video and crystal clear audio live to your living room in real-time as the
interview takes place. Pretty impressive, huh? Well, maybe.

The truth is that those satellite interviews
aren’t always what they appear to be. Oh, some are real, most certainly.
But every now and then you’ll catch a Dick Clark Bloopers special or a local
news reporter using a trick similar to the one I’m about to share.

Making video is all about selling an illusion
to your audience. Every time you make an edit you manipulate time and therefore
tweak reality. Here’s another one for your bag of video tricks: the secret
to making a believable satellite interview for your next project.

Next, prepare a set from which your host will
conduct the "remote" interview. The scene may or may not include
a news desk, but must include a prominently displayed monitor secretly hooked
up to a VCR. Play the tape shot earlier so the image of the guest appears
on-screen. Position your interviewer so that when the tape is played on
the monitor the two appear to be looking at each other. The scene will be
most believable if you shoot the interviewee talking directly to the camera
and then position the monitor at a slight angle in the scene. Phase two
is now complete.

The final element needed to make our satellite
interview believable relies on the acting ability of our news anchor. Referring
back to the original script, play the tape while the interviewer interacts
with the pre-recorded guest. For best results, run the audio from the videotape
and the mike from your host through an audio mixer. Voila. The remote interview:
not quite live, not exactly via satellite, but a video effect worthy of
network broadcast.