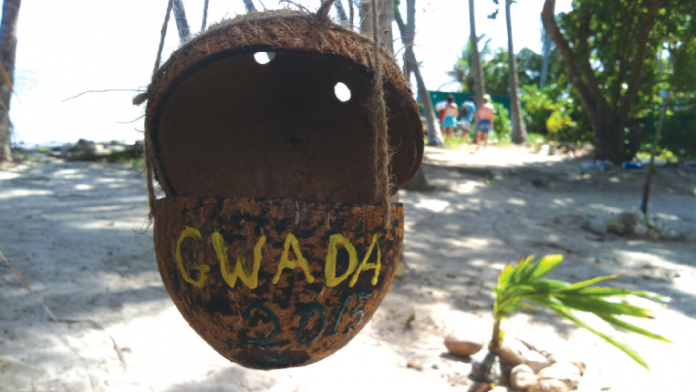 “Do you have some identification?” asked the short, white French policeman with close-cropped black hair, clean-shaven face, wearing a baby blue shirt and dark blue pants. On his belt he carried a pistol, a Taser, handcuffs and some mace.

“Yes, I have a driver’s license.” I said as my heart began to race because I have never been a fan of authority and the police generally aren’t very fond of my fly-by-the-seat-of-my-pants lifestyle, tattoos, guitar playing and skateboarding. I seem to be having too much fun for their regimented lifestyle.

“Do you sleep here?” asked the officer with a look of bewilderment on his face as he scanned the palm frond beachfront tree house looking at the old rusty blue box spring with faded black shag carpet covering the springs, and small dirty red pillow that I was sleeping on.

“Yes I’ve been living here for the last couple of days. I’m a filmmaker and writer and I am working on my assignment for Videomaker Magazine.” I said as I rustled through my backpack looking for my ID.
“… And you have been sleeping here?” the officer asked again as if he didn’t understand me the first time.

“Yes, I’ve been sleeping here for the last few days,” I said. I found my ID and handed it over to him.

Just then a female police officer walked over with my Rasta friend Michelle, who owned the beachfront property I was sleeping on.

“This is Willow Jon: he is from California, and he makes music and films and travels the world,” said Michelle talking to the police.

The male officer handed my ID to the female officer. She began to write down my information as another cop approached, this one plump and pale — the color of soap. With his shiny bald head and squinty eyes, he began to look into my beachfront tree house, frowning.

“Is there something I should be aware of?” I asked the officers.

“I know this lady, but she didn’t know I was the owner of this beach,” said Michelle, smiling his big friendly Rasta smile.

“Good, well now they know whose property they are on,” I said, with a bit of attitude as the officer handed me back my ID and began walking away. I grabbed my Canon handycam and began narrating what had just happened with the cops in the background.

When traveling the world I make an effort to research and observe the local customs and try not to just barge in with my camera poking it in everyone’s faces.

My name is Willow Jon Collamer, and I’m living my American dream. I taught myself how to make short films about eight years ago, when I started interviewing artists, musicians and other interesting friends of mine. Over the years I’ve participated in 48 hour film festivals, received a video scholarship to the Wild Mind Film Camp and worked my way up from intern to video producer, editing and shooting videos for colleges, professional artist, athletes, activist, musicians and other passionate people living life to the fullest.

Right now I’m writing this article from the island of Guadeloupe in the French Caribbean where I’m sleeping in a tree house on the beaches of Saint Anne with the local Rastas, eating coconuts from the trees, learning the traditional palm frond weaving technique and sharing stories over nightly campfires. My French consists of about five words, so I’m usually pointing to what I want and making comical sounds or gestures, but I’ve come to understand there are many other ways to understand people than just language.

Gearing up for Travel

I’ve learned to pack light over my years of travel and most of my backpack consists of my video and audio gear and my MacBook Pro. I’m wearing my coveted purple shorts, which I’ve had for the last two years, a black button up shirt, to which I’ve had to sew some new buttons. Discovery Channel paid for my grey skinny jeans because I was a participant on the premier of their new survival show called, “Tethered,” which aired in the U.S. on October 5th, 2014.

When traveling the world I make an effort to research and observe the local customs and try not to just barge in with my camera poking it in everyone’s faces. I am friendly, outgoing, I smile a lot and ask permission of the people before I film them. If they are too shy for the camera, I take out my Olympus LS-10 digital voice recorder, set the recording levels and put the recorder in my shirt pocket or on a tripod. Olympus offers many new versions of this recorder but after years of use, this one still works perfectly. One thing my dad taught me was It always pays off to invest in high quality gear.

Many people around the world live in poverty. Things we take for granted like clean running water, cable T.V., technology and refrigeration are luxuries, so being able to create a video for someone and put it on the internet is a big deal and their smiles and gratitude remind me I’m creating and sharing joy, which is one of life’s greatest gifts.

I’m currently shooting with a Canon VIXA HF-M31, which records up to 1920 x 1080/60p HD video onto a 32 GB flash hard drive with the addition of an SD card slot for more memory. I’ve taken this camera all over the world from Thailand, Cambodia, Laos, Spain, France, Portugal, Colombia, Ecuador, Panama and more, and it has held up very well considering all the buses, trains, planes, backpacks and bags I’ve stuffed it into. The touch screen is touchy to say the least. The lens cap is stuck open and it makes a funny clicking sound when I turn it on, but it’s still recording audio and video.

This year I witnessed Brazil’s amazing Carnival dancers with their brightly lit handmade costumes of butterflies, skeletons, animals and trees and the bands with huge bass drums, snares and tom toms pounding out percussion beats backed up by a pulsing horn section that echoed off the cracking white stucco walls and flickering white and blue lights left over from the recent Christmas celebration. The ambient light of the sunset shown a warm amber light on the black glistening bodies lost in their musical marching trance.

On the last day of Carnival there were no busses running but I wanted to get my laptop on the other side of the island so I decided to try hitching a ride. On my way out of town, I got caught in a torrential downpour where I finally found shelter under a dock leading to the ocean. I’m super glad I purchased my Sea to Summit 13 liter Big River dry bag that holds my MacBook pro, external speaker, Kaosilator Dynamic Synthesizer, headphones, iPhone, adapters, extra camera batteries, battery chargers, cords, passport, debit card, driver’s license, money and my journal or everything would have been ruined.

Usually, I’m shooting handheld when I travel and interview people I meet on the go, but when I need a super steady clean shot I use my Manfrotto compact MKC3-H01 tripod, which supports my lightweight Canon HFM-31 perfectly and weighs just over a pound.

The main thing I have learned while shooting video and travelling is compactness and lightness are necessities. I’ve tried traveling with a Sony PMW EX-1, which has great HD picture quality and a Manfrotto 504 series tripod, but trying to carry the gear through airports, around town and hiking into natural settings, the weight and space was too much for me to handle. I sold it and went back to the compact HD handycam, which delivers astonishingly high quality images and pretty good sound for the size of the microphone.

Know what’s out there

Keeping up with the latest and greatest doesn’t mean lugging around a bunch of expensive gear. One of the best inventions in video production in the last century has to be the GoPro HD camcorder; waterproof, durable, high-quality, with a huge array of mounts for everything from skydiving to surfing, motorcycling, skateboarding, horseback riding, car racing and any other extreme sport you can think of. I used my GoPro to film a zip line video in Montanita Ecuador, mounted it to my helmet and soared over the forest canopy 300 feet below with the ocean swirling and roaring in the distance. The footage turned out pretty awesome. When on the lookout for new equipment, make sure it’s not just the best, but the best for the situations you intend to shoot in.

The more places you travel, the more buses, planes, trains, boats and people you will encounter and the possibility of theft increases. Trust your instinct and always backup your footage regularly. An ironic but still not funny story I have about theft is when I was watching the movie, “The Sting” starring Robert Redford on my laptop on a bus ride from Quito Ecuador and my backpack, which was right between my feet was broken into and all of my electronics, SD cards, with all my original non-backed up footage of the past 6 weeks and cash was stolen as I naively watched a video about a heist. If any of you have ever had your creative work stolen, you know the feeling I felt; extreme anger, helplessness, depression and more than anything the feeling and knowledge that the theft, at least of the creative property, could have been prevented by backing up my footage or just sending my SD cards back home.

People all over the world are hungry for creative, fun, travel videos so grab a camera, a backpack, water bottle, some courage and get out and see the world! The time is ripe for you to take an adventure and become the filmmaker you always wanted to be. Remember the first step is the hardest so don’t over plan and worry yourself into a fit. Just get your foot out the front door and shoot a couple short videos in your neighborhood and you will be on your way to becoming a travel filmmaker. Also start with by creating a few short simple 30 sec videos to get the hang of using your equipment, transferring footage, editing, adding titles, music, etc., and then move on to longer more complicated videos.

Check out my website at www.Willowjon.com to find out where in the world I’m at and what new crazy adventures I’m up too. Thank you so much for reading. Travel, write, inspire and share!