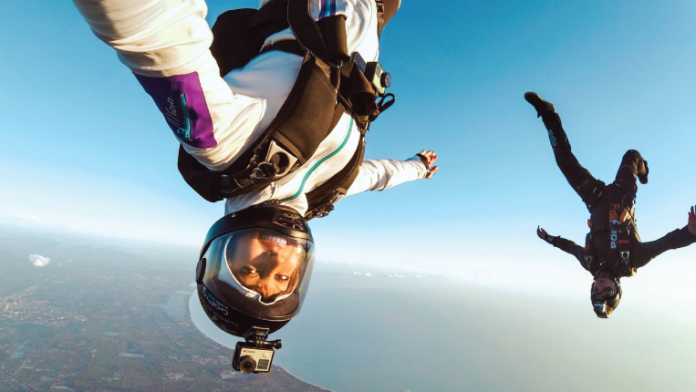 Ok, here’s the situation: You picked up an action camera from the local big box store, brought it home and went to work filming the next Red Bull Challenge. You charge up the battery, insert a memory card, step out the front door and get started. After running around the yard, suction cupping the camera to anything with a smooth surface, wearing it as a human hood ornament atop your head and capturing a bike ride through the forest with the camera on the handlebars looking back at you, it’s time to pull that footage off the memory card and build a masterpiece.

The only problem is that the footage looks like junk. Shakes, weird angles, that darn sun not cooperating. But hang on just a tick. This is 2015. Action cameras can shoot 4K video, capture stereo audio and operate underwater. Some of them cost a cool five hundo before buying mounts. How could a few minutes of manic behavior exceed the capabilities of one of these little cameras?


While taking an approach of putting the camera right in the action can lead to shots that were nearly impossible to achieve with grampa’s old 16mm, there will be situations where camera shake can become the unintended dominant subject in a shot.

This year’s NAB marked the 10-year anniversary of GoPro’s first camera, the GoPro HERO 35mm All-Season Sports Camera. That camera weighed half a pound, lived in a clear case like current models, could work in about 15 feet of water and included a roll of 24 exposure Kodak 400 film. Things have come a long way, but reflecting on the GoPro as a film camera back in 2005 is a stark reminder that cameras are cameras. The fundamentals still apply, whether using a Contour HD, a GoPro HERO4 or an ARRI ALEXA Mini.

So what went wrong with your shoot? Let’s look at how some of the drawbacks of action cameras — and how ignoring some basics can lead to stinky shots.

One of the issues that tiny cameras like our favorite action cams face is that there isn’t a lot of room to work with in those small casings. The likelihood of optical image stabilization is minimal, and the very form factor lends itself to situations where extreme shake could occur. They’re small, light and easy to swing around, so the temptation is to put them in positions where they can really go for the gold. They can be mounted to a hockey stick or atop a skateboard. While taking an approach of putting the camera right in the action can lead to shots that were nearly impossible to achieve with grampa’s old 16mm, there will be situations where camera shake can become the unintended dominant subject in a shot.

To combat shake, there are a few solutions. The first is to practice fundamentals of handheld shooting to develop an understanding of what effect camera shake has on footage. Videomaker has an excellent video detailing techniques that will minimize shake dramatically.

Additionally, there are many tools on the market today to smooth out action camera footage. Gimbals, steadicams, thousands of mounts and one of our favorites, the selfie pole.
Ok, so it’s not necessarily just for selfies. Mounting an action camera to a pole is a surprisingly effective technique for smoothing out shots. The pole minimizes the small shakes and movements that direct hand-holding can cause, and the extra length adds options for capturing cool sweeping shots, follows, lifts and glides, mimicking a crane or jib.

The trick with these small cameras is to use some imagination when looking for creative stabilization methods. One cool trick to try is to hold the camera against one of the best, most naturally stabilized objects on the planet: the human head. That’s right. Hold the flat backside of a GoPro against your face and take some shots — the minute shakes and jiggles will be smoothed out.

Ok, so our footage is smooth. Fewer bumps, shakes and nausea inducing pans. That was part of the problem, but the footage still stinks. It’s boring to watch and doesn’t feel right.

Going back to the concept that a camera is a camera (repeat as necessary), it’s important to remember that putting a Monster Energy Drink sticker on a camera doesn’t strip it of its properties. It still shoots footage at a certain frame size, and shots should still be composed properly. The always-ultra-wide field of view makes it easy to ensure that a subject is in the shot, but that doesn’t mean the shot is right.

While there are no hard and fast rules and composition guidelines are regularly broken to great effect, keeping composition basics such as the Rule of Thirds in mind while shooting can make a huge difference.

Of course, these basics become tricky when duct taping a GoPro to the handlebar of a Jet Ski and jumping over a flotilla of flaming barrels, so what is a shooter to do?

Plan, and plan some more. That’s right. Put down the Red Bull, take off the Oakleys and get out a notebook. Draw some pictures of the vision in your head.

While the scale of your production isn’t likely to match GoPro-sponsored driver Ken Block’s Gymkhana series, there are good lessons to pull from how his team captures his insane stunts. On these shoots there is a massive planning effort, not only on the part of the driving, but on how to shoot the driving in the best way possible.

One of these shoots can involve as many as a hundred GoPros, along with a handful of Canon DSLRs and an ARRI. Figuring out composition on 110 cameras is a huge, essential effort. These aren’t the kinds of shoots where you want to have to do a dozen takes. Many GoPros are harmed in the making of these videos, and often the first take has to work.

So plan your shoot like Ken’s team. Think about what would make for the absolute best shot, draw out some ideas for angles to try, and take some test shots. Sometimes environmental factors will still hurt a shot. It may be too dark to get a good shot on the underside of a skateboard, or high wind may add shake to a camera not mounted firmly enough. It doesn’t hurt to take some test shots to see whether your planning is going to work. Even if some footage ends up on the cutting room floor, the keepers will be that much better thanks to planning.

Oh, and along the lines of environmental factors playing a role in getting good footage, the very nature of action cameras puts them in some dirty situations. Keep an eye on how clean lenses, cases and enclosures are. A spec of dirt on the lens can ruin a shot. Don’t notice it for the whole day and kiss that time goodbye.

Ok, so now we’re getting somewhere. At least the shots are looking closer to the vision in your head. We’re dialing back the stink.

What other things can be a consideration when trying to get great action camera footage? Well, there are a few. Most action cameras, like DSLRs and other specialty cameras, lack built-in ND filters to help with exposure in bright environments. While action cameras, like DSLRs, flourish in daylight, they can have trouble dealing with things like overly bright sunlight, which can cause highlights in shots to blow out. The solution is to look for external add-on ND filter options for the action camera you are using. Some companies offer them, some don’t. If they don’t, however, a little creativity, a plastic ND gel and some tape ought to do the trick. Just make sure it’s affixed in a tight and flat manner over the lens to avoid distortion. 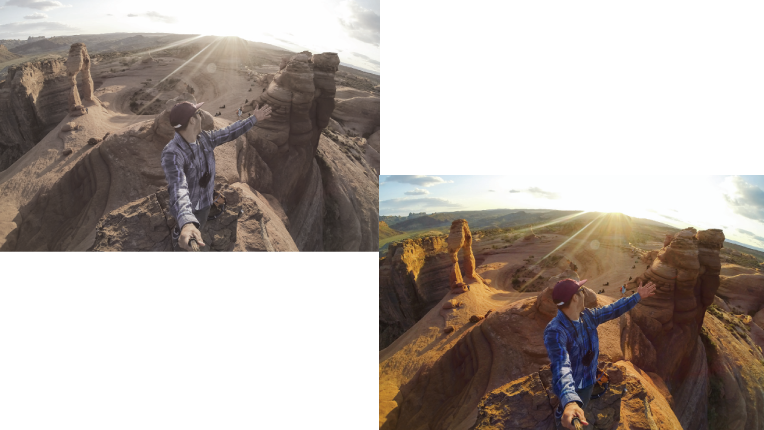 Another trick to making shots look great is to figure out the strengths of the camera. Search those difficult little menus and read user manuals to ensure that every drop of awesome is being squeezed out of that camera.

Sometimes overlooked are the amazing high frame rates many of these cameras are capable of. Shooting at a higher frame rate means much smoother slow motion is possible when editing. There are many resources online to help with slow motion and a technique called “speed ramping,” where footage goes between playing back at full speed and into slow motion over a period of time, or vice versa. In action sports, the frame rates are often ramped quickly, and cause a very dramatic effect. Learn these tricks and your footage will be on it’s way to being an action dynamo.

The last shortfall of the action camera that can affect production value is crummy audio. Most of these cameras have pretty weak audio to begin with, particularly those cameras whose microphones live inside a waterproof encasement. Most manufacturers offer an external audio option, though do some research. Many of these options will add some bulk to a set up, and there’s always a cost involved. Depending on the subject, there may be an option to add audio in post-production. Inexpensive options for sound effect and music libraries make audio in post fun.

Sound design is a skill often overlooked by casual hobbyists and even some pros but is really worth taking on. Getting audio just right on a production can really be quite rewarding.

Ok, things are looking amazing. Planned, stabilized shots are allowing extreme action to actually look better. Funny how that works, isn’t it? Control leads to better results, even when capturing the craziest action conceivable.
This is a fundamental attitude when working with camera equipment. There will always be a way to bend or break the rules, but it’s often more fun to break the rules on the drawing board before flying by the seat of your pants on set. You’ll end up happier with the shot if a few minutes of planning goes into it. Besides, planning shots is fun work. Dreaming something up and then putting yourself to the test to see if it’s possible adds challenge and builds skills.

So there it is. Plan a shoot, envision scenes and shots, stabilize the camera by choosing the right mount — or pole — for the job and then see how close you can get to your dream shots. Whether working with a GoPro or a RED EPIC WEAPON, have fun, try hard, put in the work during the planning phase and your footage will cease to stink.
Happy shooting!

Russ Fairley is a writer, producer and musician.