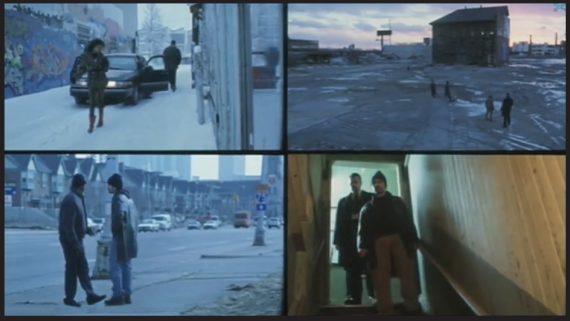 The camera captures it all with a documentary rawness, but from a distance, on a long lens and according to the director’s commentary, from inside a van.

This is an unusual approach for a scripted film because we usually associate candid shooting with non-fiction storytelling such as documentaries and video journalism. If you’ve ever tried shooting unscripted fly-on-the wall video, you’ll know the challenges of shooting discreetly without attracting attention.

Before we unpack some of the tricks for capturing useful candid video footage without spooking your subjects, let’s first talk about why you’d want to.

The BBC has guidelines for secret shooting in its handbook for independent producers. The UK broadcaster stipulates that the footage must be "necessary to the credibility and authenticity" of a story and its publication must be in the public interest.

What comes to mind is a pencil camera poking through a hole in a briefcase shooting secretly in an institution for an exposÃ© on elder abuse. Or think of a GoPro mounted out of sight in a hard-to-get-at place recording the mistreatment of animals in a factory farm. Let’s not forget also the classic hidden gotcha show, “Candid Camera,” and their memorable tag line.

Most of us, however, are not in the business of covert recording and our needs for candid video are probably much more mundane.

The footage must be "necessary to the credibility and authenticity" of a story and its publication must be in the public interest.

We might require a street scene for a documentary or some action shots of people being themselves in a variety of settings and situations at work or at play. It could be street performers, kids feeding the pigeons in a public square, interesting characters just hanging out in the hood or a group of old-timers having a kick-about in a park. Depending on the subject matter of your story, these scenes would certainly add colorful actuality to your non-fiction film.

In order to remain unobtrusive so as not to interrupt what’s going on, the need for discretion, if not downright sneakiness, remains as high a priority as it does for capturing investigative footage of wrongdoing. But how do you go about it?

The mantra for shooting discreetly in public goes like this: the smaller the camera, the less likely people will notice you going about your business.

Depending on the content you’re trying to capture, there is a range of camera gear available to do the job – spy-cams that you can hide in a pen, palm-sized digital camcorders you can set up out of sight almost anywhere or even smart phones that you can casually hold in your hand or tuck into a pocket.

Big lenses and tripods are attention-getters when set up in a busy place, but if you’re shooting from a distance you can achieve nice-looking results of people, traffic or other kinds of activity. These images can be quite telegenic when shot with selective focus on a telephoto lens, but removed from the action, these kinds of visuals don’t involve the viewer emotionally.

For that you have to move closer to the action and consider shooting with less obtrusive gear. A DSLR, or even a bridge camera that shoots video or a palm-corder set up on a bench, will do the trick.

Street photographers suggest not wearing bright clothing when doing candid shooting and leaving your fancy oversized camera bag at home. If you know you’ll be shooting in unfamiliar territory, it’s a good idea to scout the location ahead of time. You can pre-visualize your shots and identify suitable camera positions.

No tripod, please. Shooting without a tripod means you need to find other surfaces for camera placement to get stable shots — benches, mailboxes, the sidewalk, the base of a statue, steps of a building, even the hood of a car, if it’s yours.

The idea is to get your shot quick and get out. So, no fiddling with the gear. Have your focus, exposure and white balance set before you place your camera. Framing up your shot can be tricky. You don’t want to attract attention to yourself by moving the camera around until you’ve finally found the perfect angle and composition. If you’ve scouted the location, you can take out the guess work of how and where to set up. Make sure you’re zoomed out to a wide angle to ensure stability and depth of focus. Act natural.

Of course, if you can live with some instability in the shot, shooting off the hip can produce intimate, close results as you move through or near the action.

Be sure to turn off your record light. Don’t huddle over the camera to monitor and ride audio levels. Set one of the channels to automatic. This ensures that your audio won’t be ruined by loud, unexpected sounds such as construction machinery and sirens.

Covert shooting techniques and appropriate gear don’t mean a thing if you haven’t got the confidence for candid videography. Most of us are self-conscious when pointing a video camera at total strangers in public places. How do you get over that?

Short answer: Practice. Just do it.

If somebody catches you shooting and challenges you, you could read them the First Amendment, which protects your rights as a filmmaker when shooting in public places. However, it’s much better policy to just simply smile, be nice and engage them. Have a wee chat about what you’re doing and why. Transparency is the best policy.

Or, you can simply ask for permission. A colorful market scene is busy with shoppers and vendors interacting. Before turning the camera on catch the vendor’s or the shopper’s eye and confirm that they’re good with you setting up and shooting. Most people will be ok with that.

Asking for permission is a good way to start out as a shooter of candid video. It breaks down your self-consciousness and develops the confidence you need to carry out this kind of slice-of-life shooting to enhance your visual storytelling.

The First Amendment is protective of the rights of documentary makers and news shooters because, as it turns out, people’s privacy rights over what they do in public are not nearly as well protected.

However, there are right of publicity laws that protect people from having their images exploited and misappropriated for commercial use as opposed to other uses. Commercial use of a person’s likeness almost always requires that the filmmaker have the subject sign a release form.

For example, if you use that footage you shot of shoppers and vendors at the market in a news item or a documentary, you’re in the clear. But if you want to use some of those shots in a commercial or corporate video promoting the vendor’s business and wares, you’ll have to hunt down those customers and have them sign releases.