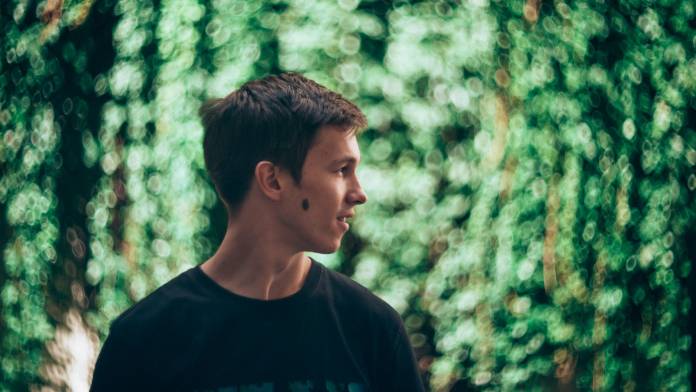 As your grasp of videography grows,  you’ll start to understand how you can control emotion and design through the use of depth of field. This article talks about what determines bokeh and what makes one type more pleasing than another.

I once showed a veteran cameraman a shot I was particularly proud of. He looked at it briefly, grunted and said “that’s some mighty funky bokeh you got going on there.” And went back to whatever he was doing. Funky bokeh? I was really puzzled. What was he noticing in my shot that I wasn’t? And what was that word, “bokeh”? It sounds like a Sunday morning cartoon.

What the Heck is Bokeh?

It’s inevitable that the more you learn about a topic the more detail you see in things. Searching the Internet you might learn that “bokeh” is a Japanese word for describing the out of focus areas in an image which has no English equivalent, but that’s actually wrong. It’s sort of like saying “Godzilla” is a Japanese word describing a giant city-smashing monster that has no English equivalent. The english word for “bokeh” is “bokeh” and among videographers, photographers and cinematographers, it’s commonly used.

Bokeh doesn’t describe how out of focus the background is, only how nice it looks. Depending on the design of a lens the out of focus areas can be pleasing or … “funky.” In this article we’re going to take a look at the things that make up pleasing bokeh which will help you in your future choices of lenses so that when you show your meticulously shot scene to a crusty old cinematographer, he’ll say “that’s some mighty fancy bokeh you got going on there.”

Out of focus areas, without in focus areas, are just out of focus. Any talk about bokeh really needs to begin with a discussion of depth of field: the area of a shot which is in focus. “Depth of focus” might be a better term for it.

Depth of field is usually defined in terms of “shallow” or “deep.” A shallow depth of field has a very short distance from the lens, sometimes a fraction of an inch, where objects are in focus. A deep depth of field may extend from a few inches to infinity.

First: the focal length of the lens does not actually affect the depth of field. The focal length does, however, affect how magnified the out of focus areas are in your frame, and it affects how far your subject needs to be away from your lens, so the magnification of the lens makes it appear that the background is more out of focus by giving it more screen space. If this doesn’t make sense you can safely pretend that the longer the focal length the shallower the depth of field, just remember it only looks that way and don’t say it at parties where there are fancy cinematographers. 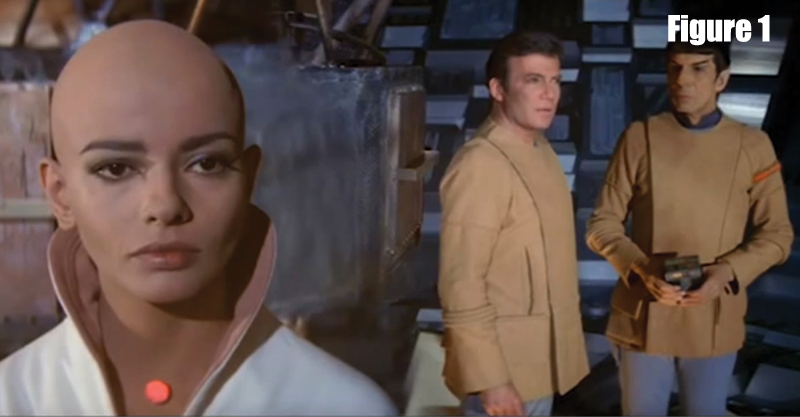 A split-focus diopter was used in Robert Wise’ 1979 Star Trek: The Motion Picture to keep Persus Kambatta in focus on the left and William Shatner and Leonard Nimoy in focus on the right. In between the two, you will notice an inexplicable out-of-focus area; that’s the space in between the two halves of the diopter not actually focused on anything. Most movie viewers don’t notice such shenanigans, but now you will, every time you see it done.

With more and more videography being done with DSLRs, very fast, inexpensive interchangeable fixed focal length lenses, with their shallow depth of field, are now easily within the reach of prosumer videographers. Want some captivating video? Try putting your subject close to the camera, adding a simple 50mm lens, opening up the f-stop to f1.8 and watch your subject pop out of the background. Be careful however, the very narrow depth of field makes it easy to have your subject out of focus if you’re not paying attention.

Now, What’s with the Funky Bokeh? 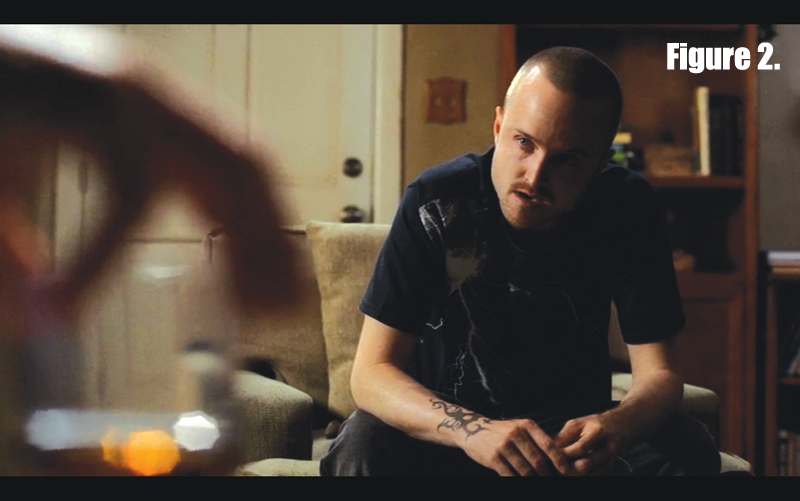 In this scene from season five of Breaking Bad we can see an out of focus foreground that is made up of a glass being held by Walter White while he talks to his cohort, Jessee. You can clearly see the octagonal shape of an eight-bladed aperture here. Using a shallow depth of field and choosing to include some out of focus areas in the foreground gives depth to the image, there’s a foreground, a middle ground and a background, without distracting from the subject (Jesse). Pay attention during night scenes in movies, especially older ones, and look at the shape of out of focus street, traffic, and car lights, they will take on the shape of the lens’ aperture blades.

Artistic Use or Purposeful Direction?

In this scene from Gary Muldoon vs the Vampires (which I just made up) we have two characters, Gary Muldoon, the sword wielding vampire slayer in the back, and his protegee Kit Danger in the foreground. A director of photography will look at the scene and make a determination on what depth of field to use based on what the scene needs to convey. 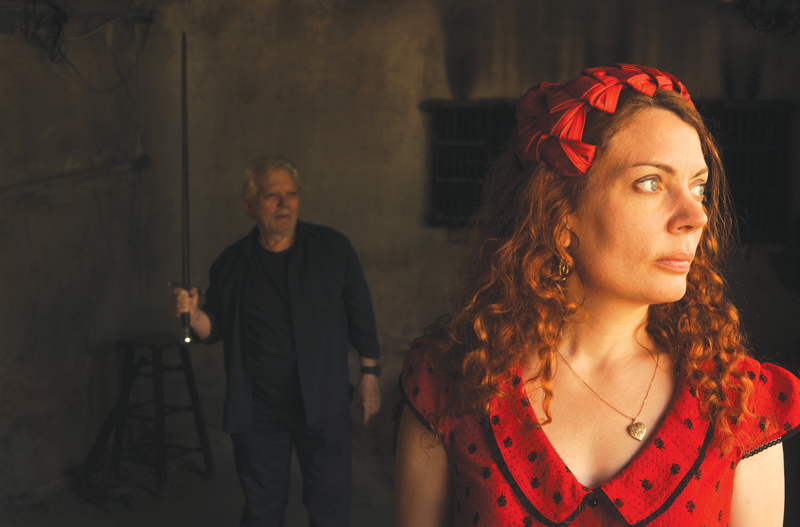 If we use a deep depth of field, we see that Gary and Kit are in this together, waiting for the sun to go down. 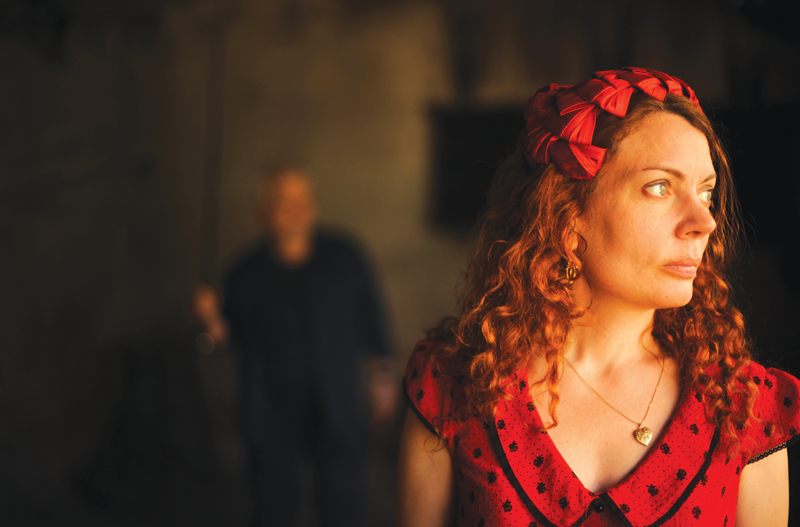 If Gary is out of focus in the background, then it draws our attention to Kit. What’s she thinking? Maybe of Captain Yurds who has gone off to fetch a load of stakes to fight the night stalkers with; will he make it back in time?

The two options give the Director and the Director of Photography two very different moods and two very different storytelling elements. If they choose to have Gary out of focus, then bokeh becomes an issue – is the out of focus area pleasing? Is it smooth? Is it filled with junk and distractions? Remember, just because an area is out of focus doesn’t mean it’s no longer competing with the in-focus areas. Bad bokeh can clobber all your hard work in setting up a shot by calling attention to itself instead of the subject.

Luckily, some of the least expensive DSLR lenses have the ability to give you a very shallow depth of field with decent bokeh. The venerable 50mm f1.8, one of the most common lenses, when shot wide open, gives you tremendous amounts of light gathering. So much so that very often it’s difficult to actually get the correct exposure because too much light is hitting the sensor. So with your 50mm 1.8 it’s a good idea to pick up a couple of neutral density filters that will screw onto the front of the lens and block some of the light coming in without affecting its color temperature.

Kyle Cassidy is a visual artist who lives in Philadelphia with his wife and cats.