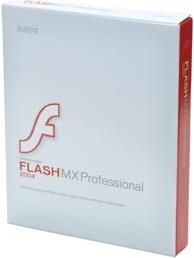 Flash is not primarily a video tool. Instead, it is a (very) widely supported Web design, animation and presentation application that you have definitely seen before (think: "Skip Intro"). Flash MX 2004 has some significantly improved video features, so we took a closer look at it as a video distribution tool. The process of putting your video into a Flash presentation is a bit more involved than just encoding it with your favorite codec, but there are some advantages.

Player Plug-in
Video is distributed on the Internet in a number of popular formats. As content providers, all of us are, of course, concerned with encoding our video in the best of these formats. And for us, "best" means "highest quality video." For our viewers, however, "best" probably means "least annoying." There seem to be an annoying number of hoops to jump through just to play back a video clip and it largely doesn’t matter which player you choose: they all seem to be equally annoying in different ways.

To start with, your viewers will have to read a sentence on your Web page that says, for example, "Windows Media 9 is required." They’ll have to remember which player they have or download a new one. Then they’ll wait: three of the most popular players (Windows Media, QuickTime, Real) each weigh in at around 10 MB. Then they’ll need to install it. And maybe reboot. And then configure it. The player software is probably going to run at startup, install a tray icon and change the file associations. (Remember how your MP3 files used to open in X-Amp, but now they open in the new player you just installed?) When viewers finally actually use the player, they’re going to be hit with advertisements, promotions or a popup splash asking if they want to upgrade to (read: "buy") the pro version of the player. It’s a bit of a Mafia protection scheme: pay us and we’ll promise not to annoy you (so much).

OK, sorry for the rant. Of course to play video in Macromedia Flash, your viewers will need the latest version 7 player: it’s a 0.5 MB download on a Windows machine (1.1 MB on a Mac). And it will install automatically and without any configuration, although you may have to reboot. And it won’t make any annoying changes to your computer or harass you in any way.

Producers
Flash is not primarily a video tool, however. Flash MX 2004 Pro installs a plug-in that will allow you to export video using QuickTime 6.1.1 ($30) from some applications (e.g. Final Cut Pro, Avid Xpress DV). This is the best option, but you can convert your source video to Flash FLV files in Flash itself. The process is not as easy as it could be from within Flash and advanced options (such as motion estimation) were difficult to get at. One significant improvement of the FLV format over the previous SWF format is that long format video is now possible.

Flash MX 2004 uses the Sorenson Spark codec for compression. With the default settings, the codec does an adequate job with low-motion video. As soon as motion is present, however, the quality drops off rather sharply and significant artifacts (quantization blocks) appear. With these settings, it is not as good as the WMV9 codec. We were able to produce very high-quality video using the full Pro version of the Sorenson Spark codec ($119), which is highly recommended.

The Complexities
The process of putting your Flash movies on the Web is slightly more complex than putting a link on a Web page. This process is not covered in the very light printed documentation that comes with the software, but the electronic documentation and online resources are excellent. The Flash developer community is legion and active and we found dozens of templates (many free, some included with the program) that beginners could use to get started.

Before you jump in with both feet, consider that creating a Flash presentation is much more involved than simply editing video. In fact, we’d put it in the same category of complexity as Adobe After Effects, so you should consider whether you want to become a Flash author the same way you would consider becoming adept at sophisticated compositing.

Advanced Servers
This review was necessarily focused on the very narrow concept of using Flash as a video distribution platform, and yet we’ve really only scratched the surface. The real advances with the new version of Flash center around Macromedia’s Flash Video Streaming Service (FVSS) software for streaming dynamic, load-balanced, geographically distributed video (among other things). While we aren’t going to review that product here, it is an important part of the Flash video strategy. Streaming server hosts are already widely available (including from Macromedia using VitalStream technology) and prices are competitive with other streaming formats (which require their own servers as well).

Not Just Video
Again, Flash is much, much more than a tool for creating Web video. If you just need to share your video on the Web, $700 is far too much money. As a presentation tool on the Web, Flash really doesn’t have any competition, and your video will never look more attractive than when it is packaged in a slick Flash template. The quality of the video could be better, but the ubiquitous and un-annoying player make it a clear winner with viewers. And that should make it a clear winner with Web content providers as well.