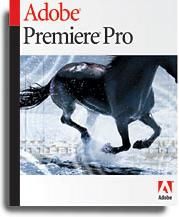 Adobe engineers starting working on Premiere Pro a couple of years ago. The program has been re-written from the ground up and bundled with After Effects (compositing) and Encore (DVD authoring) in the Adobe Digital Video Collection ($999). The aggressive price point is amazing, considering that this is a complete solution for professionals (thus the new "Pro" surname).

Premiere Pro was written for Windows XP only, leaving Apple’s own Final Cut Pro for the Mac. If you are a Windows 2000-based Premiere user, a decision to stick with Premiere into this upgrade means upgrading your OS, which can potentially lead to other hardware and software upgrades. Owners of real-time hardware rendering cards (e.g. from Canopus, Matrox and Pinnacle) must get the latest drivers to use Premiere Pro. Unfortunately, your old plug-in effects app (e.g. Boris FX) may not integrate with the new Premiere. In addition to providing a new manual and comprehensive Help, the company has posted written and video tutorials on their support site. They have taken pains to turn our learning curves into motion paths.

Our Machines and Installation

We test drove Pro on two machines: an HP xw4000 (P4 2.8GHz, 512MB RAM) and a Compaq Presario 8000T (P4 2.2GHz, 1GB RAM). The installation did not remove or replace previous versions of Premiere already installed on these machines.

Everything seemed to run quicker, on both machines, in Pro than in 6.5. Effects, previews, renderings and screen redraws all seemed to snap. We especially noticed this for simple project previews, where we’ve learned to ignore fractional delays between pounding the Enter key and when the timeline cursor actually started to move in previous versions. The product retained a nimble feel throughout our test drives.

The most obvious change in Premiere’s interface is the elimination of the archaic Video 1A, Video 1B and Transition tracks. You can now place a transition in any track by overlapping clips within that track and dropping a transition onto the overlap. To edit a transition, just double-click it. You cannot place transitions between tracks.


Premiere Pro now uses multiple timelines within the same project. Each timeline is a "Sequence" and shows up as a tab in the main timeline window or as a separate timeline in a window of its own. This allows you to create elaborate sequences and then insert ("nest") them into the main timeline. Not only does this give you an unlimited number of video tracks (nested timeline, within nested timeline, and so on), but it dramatically reduces timeline clutter and makes your projects more manageable.

There are new buttons and a few changes in keyboard shortcuts that you’ll have to learn. The keyboard is completely customizable, however, so you can revert to earlier (or simply different) keystrokes. Monitor windows now have a thumbwheel-style jog-shuttle controls. Monitor and timeline windows now have bars that one simply pulls left or right to zoom in or out. The "Navigator" as a separate tool and window is gone. There is no longer a separate "Marquee" tool and multiple clip selection is done with the normal selection tool. You can click-drag across clips to highlight all of them. Similarly, the "Track Forward" tool (remember the two arrows pointing right?) is gone and you can shift-click with the regular track select tool (single arrow) to select all clips to the right of the clip clicked.

In practice, the real-time previewing of effects in Pro performed similarly to that of Premiere 6.5, but more efficiently. As one would expect, the stammering of previews increased with the number and complexity of effects added to a clip. However, compared with 6.5 running on the same machine, Pro didn’t seem to hit the stammering point as soon or as frequently as its predecessor. Making work-area preview renders nevertheless remains a vital option for complex effects.


The big previewing difference from 6.5 is that real-time previews are output not only to the monitor window on the computer screen, but also to full-screen NTSC video, viewable on TV monitors and camcorders (via FireWire), instead of the familiar red "X" that formerly indicated un-rendered sections.

And That’s Not All

Premiere now has waveform monitors and vectorscopes to help in the use of the Proc Amp and other levels and color correction features. It also has a much improved audio mixer with a window of its own. Tracks can now be routed to various busses in much the same way a real-world mixer works. Buyer’s of the Adobe DV Collection will enjoy integration with the company’s new Audition audio editor (formerly Cool Edit Pro). Animation and keyframing is significantly improved and you can keyframe very nearly every parameter of every effect. The keyframe interface is identical to After Effects and Premiere Pro now uses After Effects’ plug-in architecture as well.


Past projects are 100% compatible and can be opened and converted to the new version, but unless you have a full backup of your old projects, we don’t recommend this.

Once almost alone in the class of prosumer editing tools, Premiere has met with stiff competition in recent years. These products have matched and sometimes bested Premiere in performance, features and usability, and have steadily added more professional tools to their collections. With Premiere Pro, Adobe squares off against challengers for the professional market.