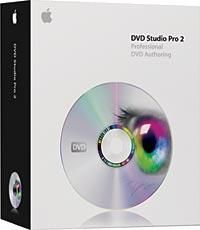 We liked the first version of DVD Studio Pro (January 2002). It was a great product with very few competitors. At that time, however, most of us were not ready to burn DVDs anyhow, since the technology was new and the hardware was expensive. And, since it was a professional product, it didn’t have many of the niceties that make consumer software accessible. Well, it’s nearly two years later and the DVD landscape has changed.

We did list three items in our Weaknesses list for the original DVD Studio Pro: it was relatively expensive, there was no internal MPEG-2 encoding and it didn’t have any authoring templates. If Apple addressed those areas in the second generation, we’d be happy. At a glance, you can see that the new version includes encoding and that Apple has knocked $500 off of the price. Our third concern was our greatest, however. Although DVD Studio Pro was well designed and usable, the blank canvas you saw when you first ran the app left first-time authors wondering what to do next. If only we had a couple of templates we could study.

The new templates that come with DVD Studio Pro are attractive, although professionals will use them for another reason. We used the templates not as an artistic end, but as a beginning. By starting with a template and dragging our video into the clearly labeled drop zones, we had our first functional disc finished in about 20 minutes. We changed the text for titles and button labels and replaced the background with our own prepared looping video with drag and drop ease. Users can also adjust button frames and highlight colors. By the time we had created our own menu thumbnails and changed the background, the menu didn’t look like the original template.

Advanced users won’t use pre-fab templates, except perhaps as learning tools. Even if you forego templates and go full-manual, the usability improvements in version 2 are impressive. DVD Studio Pro 2 integrates well with Apple’s other multimedia tools. For example, Final Cut Pro markers convert directly to chapter marks, with the marker names carrying over to chapter/button names. We also liked that you can create automatic DVD slideshows from iPhoto albums. The layout of the application is very productive.


We found the context-sensitive drop boxes (Drop Zones) to be very efficient timesavers. Depending on where you drag assets, these context menu pop up and automatically display all of the options possible for that destination.


The advanced features are truly impressive. For example, it was easy to create multiple video angles on the timeline. Although Hollywood isn’t using this standard DVD feature much, we can think of lots of ways this might be useful: any multi-camera event (concerts or even weddings), or additional B-roll for product demonstrations or training videos. DVD Studio Pro is efficient in how it handles multiple angles, so a few short segments of video will not double the size of your entire DVD. In order to let your viewers know there is an optional angle to view (which can be accessed by pushing the Angle button on the remote control), you can place a button overlay on the video. Further, it is possible to script alternate angle events automatically. Apple also has an editing feature that allows you to create various edited versions of your movie (e.g. one with the violent scenes removed) without duplicating the content.


There are many more advanced features that we just didn’t have time to test in detail, such as the much improved subtitler and support for line 21 closed captioning. Scripting support goes beyond just multiple angles and includes using the memory registers in your DVD player, which means you can even create simple DVD games.

While only a fraction of you will program interactive DVD games, DVD Studio Pro 2 has a host of new features that everyone will find very useful. On the top of the list is the MPEG-2 encoder, which is part of Compressor, the same encoding utility that comes with the new Final Cut Pro 4. Encoding can be completely automatic or you can tweak the settings if you know what you are doing. Apple also includes stereo and 5.1 Dolby Digital sound encoding, which was a $1,000 option not too long ago.

We have to step back from all the new features to emphasize what we really like about DVD Studio Pro 2: it is a wonderfully designed and pleasant to use application. The original app was pragmatic, spartan and, quite honestly, a bit unfriendly. The new user interface is not just a slicked-up version of the old application, but has truly been redesigned from the ground up. Usability is vastly improved, and not just for novice users. For example, the outline view of your DVD will give you an overview of your entire project at a glance. You can easily find errors and unlinked menus and buttons by sorting the project summary. The user interface is also highly customizable, so you can make it work for you.


This release caught us by surprise. We expected the DVD Studio Pro 2 to be better than, but largely the same as the first version. Instead, this is a whole new application that is a magnitude better than the original at half the price. And that’s saying a lot, especially considering how much we liked the original.